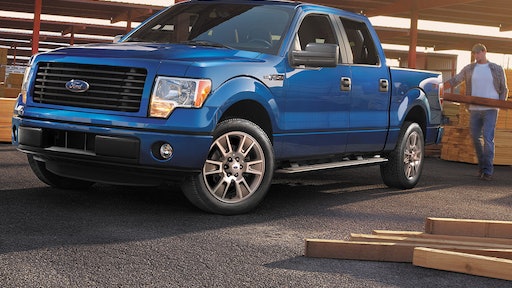 Ford is offering three new vehicles this year that lend themselves well to a variety of landscaping-related applications.

The 2014 F-150 also features Connectivity Boost, which combines Ford's innovative connectivity technology Sync with MyFord Touch to improve the driving experience while allowing drivers to keep both hands on the wheel. This technology is optimized for truck owners with specialized buttons they can operate while wearing gloves, and a larger screen for improved readability. Additionally, a conductive cell phone charging station is a standalone dealer-installed accessory, and is available on the FX, Lariat, King Ranch, Platinum and Limited.

The 2014 F-150 also features a variety of style upgrades, including a new Sunset Metallic color, new 18- and 20-inch wheels offered in various trim packages, a new grille, and the new Marina Blue specialty leather with natural perforation on the Limited model.

The 2014 F-Series Super Duty is also available with a truck-specific version of the Sync system with MyFord Touch. This truck-friendly version offers specialized buttons and large rotating knobs to accommodate work gloves. Drivers also get access to Vehicle Health Report and 911 Assist, both no-charge lifetime features, along with Sync Services including traffic alerts, business search and more.

Transit vans. Ford is also rolling out a new Transit van for 2014. The 2014 Transit features a six-speed automatic transmission with overdrive. The 3.2-liter Power Stroke Turbo Diesel inline five-cylinder, 3.5-liter EcoBoost V6, and 3.7-liter Ti-VCT V6 engines have yet to be rated.

Ford says these vans are designed for comfort inside and out. The front suspension consists of subframe-mounted MacPherson struts and a stabilizer bar for smoother, flatter cornering, combined with progressive rear leaf springs and heavy-duty gas-charged dampers for well-controlled ride quality—regardless of load status. Speaking of loads, maximum interior load length ranges from 145.2 to 171.5 inches; max load width is 69.8 inches; and max load height is 55.8 to 81.4 inches.