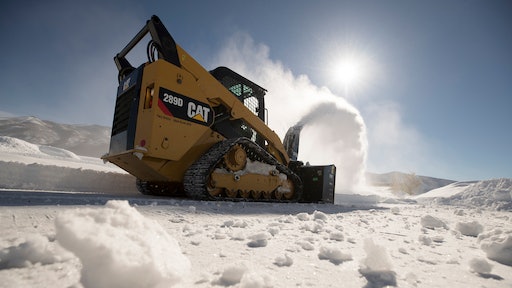 The appeal of either skid steers or compact track loaders for use in snow removal is understandable. Both machines have advantages and disadvantages in snow work. One benefit if the variety of attachments available, such as this Caterpillar 289D Compact Track Loader with SR321 Snow Blower.
Caterpillar

Both skid steer loaders and compact track loaders offer the ability to move large amounts of snow at a time. Which makes the best choice?

When choosing between a skid steer loader (SSL) or compact track loader (CTL) for your snow removal projects, it is important to first understand what the machines do and how they differ.

Both skid steers and CTLs are compact pieces of equipment that can turn on a dime and maneuver in tight spaces. They can also both be outfitted with various attachments, such as buckets, brooms, pushers, and plow blades.

Where these machines differ, however, is primarily in the way they traverse ground. Skid steers have wheels and tires, while compact track loaders operate via high-floatation rubber tracks.

“Skid steer loaders (SSLs) have been used in snow clearing and removal applications due to their fast travel speeds, which allow them to quickly traverse the area they are working in or move from one location to another,”  Caterpillar product specialist Kevin Coleman says. “With SSL tires, the contact area of the tire is small, so they transmit high ground pressure that delivers a good grip for moving snow. In contrast, the travel speeds on compact track loaders (CTLs) are slightly slower than that of a comparably sized SSL.”

Coleman goes on to explain how CTLs differ from SSLs for snow removal.

“A CTL also delivers lower ground pressure, due to the long rubber belt,” he says. “While the lower ground pressure is normally thought of as a negative in this application, this objection is overcome by equipping the CTL with rubber tracks that have a bar-style tread. This tread pattern can grip and bite the snow, allowing the operator to push and turn with a rubber track machine, much like a SSL.”

He also says, “Equipping your CTLs with a bar-style tread pattern allows the track to grip the snow much better than the traditional block-style tread, and delivers great stopping, turning, and pushing performance. In fact, the CTL platform has its other advantages in snow clearing and removal applications. The long undercarriage of a CTL gives this platform an advantage in stability when performing tasks like loading or stockpiling the snow.”

“The first and most common method is to push or scrape to clear the snow,” he explains. “This is done using a plow blade, a larger snow push or most often, a bucket. Snow pushers are wider and taller than a bucket, so they are capable of clearing more area quickly.”

Ryan says this large-area-clearing ability leads to loaders with snow pusher attachments commonly being used to clear parking lots. But he adds, “[Snow pushers] can’t be used to lift, carry, or dump the snow, so they require enough space to pile the snow on-site.”

“A second common snow application is to sweep the snow using a broom attachment. Brooms work well in light snow and long-run applications because they continuously move snow without the need for all the forward/reverse cycles that pushing snow requires,” he adds.

“This configuration excels in moving heavier snow from long-run situations, however; it is most often the slowest of the three methods for snow removal,” he says.

When asked which machine he recommends most highly for snow removal, Ryan says in general,  he believes the SSL is the better machine for snow removal, as many of its attributes provide superior performance. He notes that SSLs are often faster, less expensive, and lighter weight than CTLs. Their tires may also hold up better to wear than the tracks on CTLs.

“That being said we have seen more and more CTLs being used in snow removal,” he says. “This is due in part to track technology improvements with track manufacturers developing all-season or multi-season tracks that provide improved traction in these types of application.”

Ryan also notes the biggest factor as to why more track loaders are being used in snow applications is due to operators’ recognition of CTL performance in non-snow applications. “If a business or operator is going to buy a machine, they usually buy the machine that provides the best performance during the nine months of the year when most of North America isn’t using machines for snow removal,” he says. “ “Even in some of the more northern areas of Canada, I’ve seen that track loaders are very commonly found in snow applications.”

Coleman echoes many of these sentiments, touting the impressive snow clearing abilities of both machines.

“One of the shared benefits is the versatility of the SSL and CTL platforms as it pertains to snow clearing attachments,” he says. “These machines have the operator comfort and hydraulic capability that allows them to be connected to, and efficiently operate, a wide range of attachments, such as snow wings, angling plows, multi-v plows, straight plows, snow blowers and snow pushes.”

He adds that both the Cat SSL and the CTL platforms are equally adept for many of the aspects of snow clearing and removal. “Both the SSL and CTL have the benefit of being extremely nimble and maneuverable, especially when compared to larger wheel loader machines,” Coleman notes.

“The SSL or CTL machines are also very transportable, making them a great tool for snow clearing and removal applications,” he says. “In addition, both platforms feature great sight lines to the attachment, the tires or tracks, and the sides of the machine, allowing the operator to work confidently in these tight, challenging conditions. As a complement to the front and side visibility, an integrated rear-view camera enhances rearward visibility for the hard-to-see areas behind the machine.”

Coleman also points out that choosing the right equipment for your needs comes down to preference and all-season applications.

“Machine utilization is also a contributor to which platform (SSL or CTL) may be preferred for snow clearing,” he says. “As an example, customers that work in landscaping applications in the summer may also be involved in snow clearing or removal in the winter and would likely [already] own a CTL. [At the same time], a paving customer may prefer to utilize their existing SSL assets for snow clearing.”

Tips for SSL and CTL Users

Coleman and Ryan each offered tips for owners, renters or users of skid steer loaders and compact track loaders.

Coleman explains that utilizing owned machinery may require some planning when transitioning from one season to another.

“For a SSL owner, this may require the exchanging of traditional SSL tires for a more aggressive snow tires,” he says. “In contrast, a CTL customer may be able to avoid the need for seasonal changes by taking advantage of a track with bar-style tread that provides an all-season track solution.”

Not only does the bar tread grip the snow for clearing or removal applications, it also provides low ground disturbance for warmer weather grading and landscaping applications.

Ryan adds, “In general, when working on paved surfaces, operating using wide turn angles and y-shaped turns will help prolong either track or tire life. [Users should also] remember that a single attachment may not be the best solution for your snow removal needs.”

“When a business earns its revenue by the amount of area they can clear per hour, or number of properties they can maintain, it may make sense to have two attachments available so you have the right tool for the right conditions, your local attachment manufacturer can usually provide time-study data to help you make the right buying decision,” he says.

Either style of machine will get the snow off the pavement. The final decision comes down to how you use the machine when it’s not snowing and determining which machine will offer the lower cost total for ownership or operation.

Both machines will get you there. The nuance of which machine will offer a lower total cost of ownership/operation will come down to how you use that machine when it’s not snowing. Skid steers offer distinct advantages if the machine is only used in snow work and for operation on improved surfaces. CTLs provide greater operator comfort and a smoother ride, especially when working in off-road applications, and contractors have proven willing to pay extra in terms of the initial price and long-term undercarriage costs.