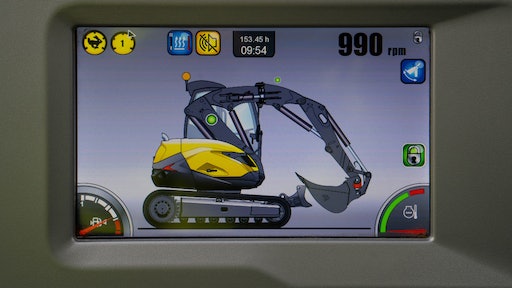 The system acts as a limiter, maintaining the desired speed so operators can focus on the task at hand for increased safety and productivity. Speed Control increases versatility for the 6MCR, 8MCR and 10MCR machines, making it easy to move across the jobsite at speeds up to 6.2 mph (10 km/h) or maintain very low speeds for applications such as mowing or snow removal.

“Mecalac products are designed to simplify the lives of our users without compromising on performance,” said Peter Bigwood, general manager for Mecalac North America. “Our MCR series provides the quickness of a skid steer with the 360-degree rotation of an excavator for versatility and travel speeds two times faster than any compact excavator. But sometimes speed isn’t everything. Speed Control allows operators to easily match their speed to the task.”

With the turn of a dial, operators can easily select their desired speed. When combined with the flexibility from a range of attachments — including mowers, mulchers, sweepers, snow blowers, and many more — the Speed Control system maximizes versatility for all MCR series units, increasing productivity and jobsite efficiency. Mecalac’s patented quick coupler, CONNECT, another advanced feature standard on the MCR series further increase speed and ease of use by allowing operator to switch between attachments without leaving the cab for greater efficiency in a variety of tasks.

“The MCR series is like a high-tech multi tool; you really can do it all with a single machine,” Bigwood said. “They don’t need a mower and a skid steer and an excavator. There’s an attachment for every task, and now a speed setting that matches. With Speed Control, operators don’t need to worry about trying to maintain a certain speed; they can just focus on the task at hand.”

MCR units also feature Mecalac’s innovative three-part arm and a 360-degree rotating ability for an extended range of movement and game-changing compactness. Operators can do more from a single position or within confined spaces with increased flexibility and reach while minimizing unnecessary movement. The three-part arm can also be tucked in, allowing for extra compactness and mobility without overbalancing the unit in the front — resulting in a true zero-turn radius. In addition, the boom system gives the MCR unprecedented lifting capacities — pound for pound, exceeding anything else on the market.