California Continues to Move toward a Post-Lawn Future 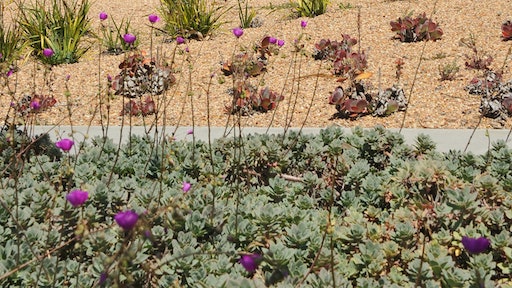 On the first Saturday of December in a northeastern neighborhood of Fresno, California, Jeff Collins and his neighbors were putting up their Christmas decorations: strings of lights along identical gable roofs, animated reindeer and inflatable snowmen. But for Collins, the task involved an extra step—laying down tarps to help the inflatables stay upright in his grass-free yard.

Collins had the lawn ripped out in 2015, at the peak of one of the worst recorded droughts in state history. He opted for wood chips and sago palms instead. “I just got tired of trying to keep the grass green,” he said. He’s planning to put in artificial turf eventually—his wife prefers to retain the look of a lawn—but he says he would happily move to a new development where drought-friendly yards are standard.

Though Collins may have been one of the first, he is no longer alone. In his subdivision of more than 200 houses, by this reporter’s count, at least 35 other residents are opting for rock beds or bricks, wood chips and century plants, or plain dirt.

The change can be seen on Google Maps, which captured it looking verdant between droughts in 2009, and again after years of water restrictions took their toll. Streets where lawns once bled together are becoming patchworks of dead grass and xeriscaping.

How to Get Started with Xeriscaping

Is Xeriscaping for Your Customers? The Fundamentals of Low-Water Landscaping

Here are five things employers in the landscaping and construction industries can do to attract and keep employees on the job in this competitive hiring market.
July 27, 2020
Follow Us