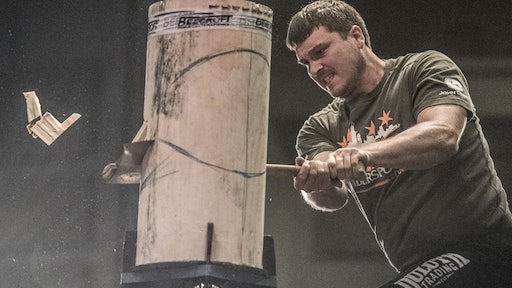 After two days of thrilling, wood-chopping competition, Matt Cogar of Chillicothe, OH, made history. He came out on top in the Stihl Timbersports 2016 U.S. Professional Championship on July 16, defeating seven of the nation’s best lumberjack athletes in dominating fashion in front of an enthusiastic crowd at Tinley Park Convention Center in Chicago Southland.

“It’s an honor to be considered on the same level as some of the best guys this sport has ever seen, like Jason Wynyard and David Bolstad,” said an emotional Cogar.

With this win, Cogar becomes the first U.S. athlete to win four consecutive Championships in a row and further solidifies his reputation as the best lumberjack in America.

Cogar scored 42 of a potential 48 points, making this his most lopsided victory in his four-year run. He won three events (the underhand chop, the stock saw and standing block chop), finished second in the springboard chop, third in the hot saw and fourth in the singe buck.

The 2016 Championship spanned two days, with the qualifying round held on Friday. Twenty competitors were divided into two pools of 10, where they competed in six disciplines: springboard chop, stock saw, standing block chop, single buck, underhand chop and hot saw. The top four athletes from each pool advanced to the Championship round on Saturday.

During the Championship round, the finalists proved why Stihl Timbersports is known as “The Original Extreme Sport,” as they chopped, sawed, bucked and battled their way through another round of each discipline. Arden Cogar, Jr. finished in second place, and Nathan Waterfield and Walt Page tied for third place. For their Saturday night performances, Cogar, Jr. earned a John Deere Gator, and Waterfield and Page each earned a $1,000 Duluth gift card. Additionally, Calvin Willard of Barnet, Vt., tore through the hot saw in 5.440 seconds, clocking the fastest time in the discipline this year.

In addition to the glory of being named U.S. Champion, Cogar was awarded a brand new Ram Truck for his win and will represent the U.S. team at the World Championship in Germany in November (with teammates Cogar, Jr., Waterfield, Matt Slingerland and Jason Lentz).

“Matt has proven to be one of the best American athletes ever, and this year I think he gets back to the podium at the World Championship,” said Brad Sorgen, executive producer of the Stihl Timbersports U.S. Series.

Before the U.S. Professional Championship round, the U.S. Collegiate Championship took place, showcasing the top eight collegiate lumberjack athletes in the country. “Wild” Billy Adams from Paul Smith’s College took home the 2016 title and earned a spot on the 2017 Pro Series.

The U.S. Professional Championship will air on ABC on October 16, 23 and 30. Sponsors of the 2016 Stihl Timbersports Series are Ram Trucks, Duluth Trading, John Deere, and Dinty Moore. Fans can follow the Series through Facebook, Twitter, Instagram and YouTube, and visit STIHLTIMBERSPORTS.com for the full results.