Transforming a traditional mower into an autonomous vehicle 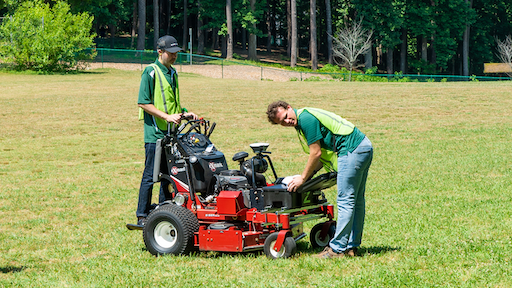 Charles Brian Quinn loves building companies, and he is eager to take on one of the largest problems in the landscaping industry: the labor shortage.

“I don’t think these jobs are coming back,” he says. “I don't think people clamor for repetitive outdoor labor, especially when it relates to repetitive lawn striping.”

Prior to co-founding Greenzie with David Cummings, for fun Quinn once built software that raises and closes the blinds at his home automatically at sunrise and sunset.

“I simply love technology that just works,” he says.

His first venture into the landscape industry was with a company called lawn.com. Through that venture Quinn had an opportunity to ask landscapers about their needs. The universal answer was, “We can’t find anybody to do the work.” When first developing Greenzie, he went on countless ride-alongs with the landscaping crews to experience what they were going through. “That was an eye opener to me about the lawn industry,” Quinn says.

Among his primary observations was the fact that landscapers sat or stood on a mower for sometimes hours at a time, particularly at the larger corporate or commercial sites. For the contractors, it was just part of the job, but to Quinn there appeared to be another solution. Why couldn’t there be an autopilot setting?

Improving upon what already exists

Looking into the industry Quinn found that there were the robotic mowers such as the Husqvarna Automowers. The general principle behind the robotic mowers is installation of a perimeter wire that helps guide the unit around the yard.

Read next: Is the Robotic Lawn Mower an Answer to the Green Industry Labor Shortage?

“I think robotic mowers are great. Probably the best you can do right now if you want to put all that hardware in your yard,” Quinn adds. “If I were a hardware guy and all I knew was hardware, that's what I would build. I’m a software guy and a  big fan of robotics.”

As he analyzed the issue, he believed they had to conquer the issue via software. “I have experience in software as well as robotics and I’ve started a few companies,” he says. “I would say my main passion, my superpower is software and assembling high powered teams to solve big problems.”

Greenzie, the first company to launch from the Atlanta Ventures Studio, is a response to the labor shortage and talking to landscapers about what they need. With no automation available on the larger commercial sites, Quinn saw a need.

“We need help taking a lawn crew that's a four or five-person crew down to two or three and the reason we need that is because they don't have enough labor to do all the other jobs they have,” Quinn says. “The way we do this is to automate it by retrofitting their existing equipment with this autopilot technology that basically adds an aftermarket autopilot.”

The software gives the machine autopilot functionality and allows it to do perfect striping.

“The unique part is that we're not trying to pre-program in, it's not a CNC machine that you can program to go left or turn right,” Quinn says. Greenzie engineers have utilized existing open source technology and applied it to existing mowers.

“This company is a product of deep customer discovery and a systematic uncovering of exactly what our customers want us to build and we're just building that,” he adds.

The current prototypes have been installed on two stand-on mowers, a 48-inch Exmark and an electric Greenworks Commercial unit. Quinn notes that ride-ons have seats and those are not needed where Greenzie’s technology is headed.

“We only work with stand-on models because I believe in having gone and asked my customers as well as ridden on them mysel amd reviewed all the models,  that stand-ons are the more efficient and program the best to automate based on the they whey work,"  Quinn says. "“The thesis of the company is that we're a software company. We build software for autonomous robotic lawn mowers and to prove that the software that we build can work on all the models of zero turn mowers.” 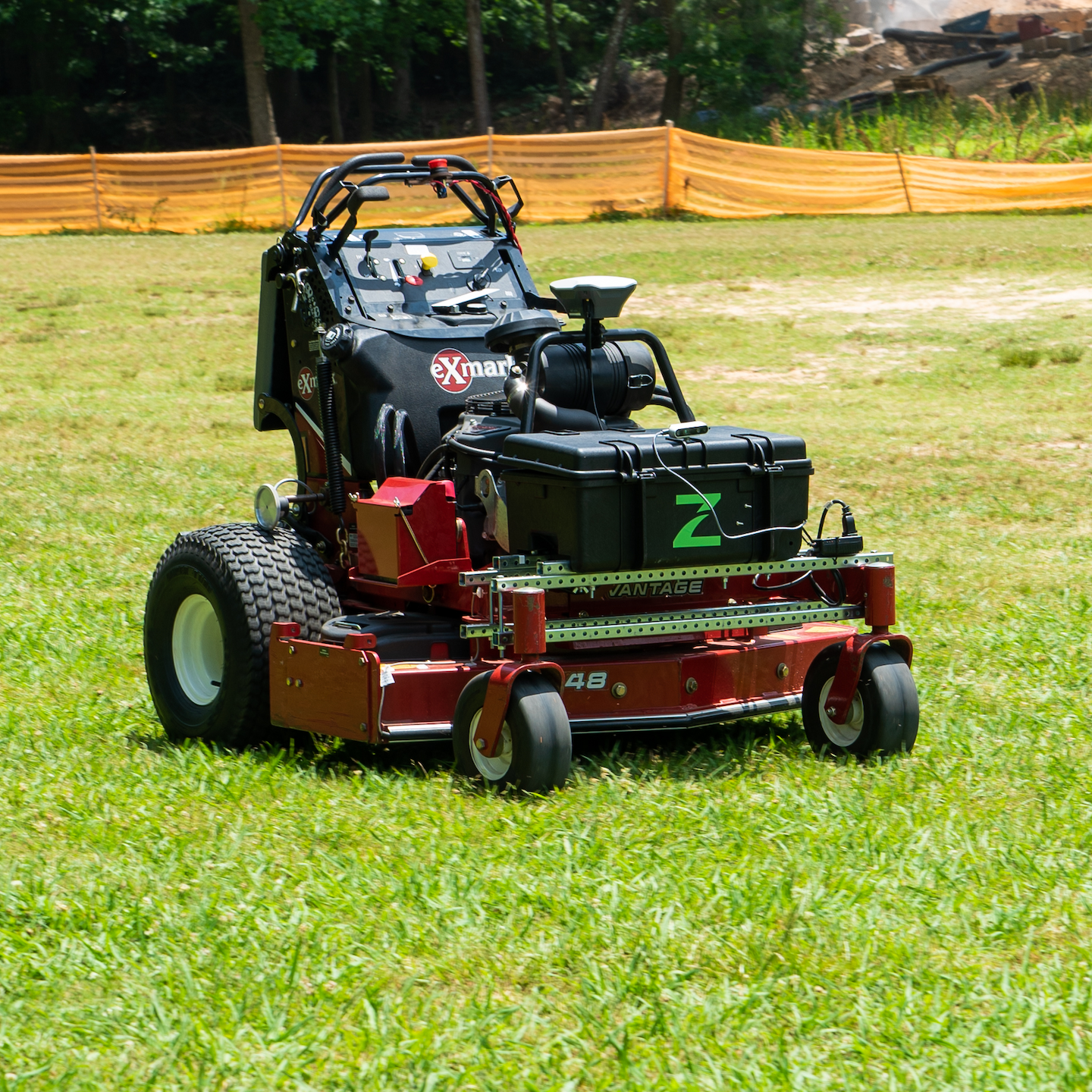 The current prototypes have been installed on two stand-on mowers, a 48-inch Exmark and an electric Greenworks Commercial unit.They were very particular in selecting the models they were going to utilize. Conducting a survey of more than 1,500 consumers, the Exmark was the overwhelming selection. The Greenworks mower was the result of his search for investors which led him to a Greenworks distributor.

“Electrification is coming,” Quinn says. “I just  don’t know when that price will get there for people thinking about it I think that with autonomy, if we come out with our product and it works extremely well on these electric mowers, it could be even more of a labor savings.”

To ensure the software worked, he had to build the first retrofit conversion kits, noting that “hardware” is a necessary evil for him.

He insists that Greenzie is not messing around. Quinn and his co-founder David Cummings have started a few software companies and the money that has come in for Greenzie has been utilized very strategically.

“We talk about robotics experts and people who are building game changing companies and we are kind of stacked,” he says. “I want people to know that this is coming.”

Quinn says there are some safety standards they are in the process of working through. He notes that one of the core values for Greenzie is "safety first." and the team is always focused on how to make the technology safer.

“I know they all have labor problems and labor shortages and so we're trying to solve it,” Quinn says. “We're trying to do it in a way that's respectful and trying to reduce the cost of labor by getting rid of the repetitive, boring, manual labor parts of lawn mowing so they can focus on making the customer happy and doing a good job.”

He notes that landscapers want to become more engaged with the roles that got them into the business, not standing behind a mower for eight hours.

“The way you can think about this is a sort of cobot," he says. “It's a collaborative robot. It performs a supervised task at least to start, triggered by the software.”

For the first iteration of the program, it will require a person to be onsite.  “We did this based on our ride alongs with our customers and seeing how they do it,” Quinn says.  With the Greenzie kit, contractors can retrofit their existing equipment with Greenzie technology that adds the software control to their mower. He says then, the operator goes around the boundary of the large turf area and then the system will finish the job.

“What that means is it can just basically do the striping and it stays inside the boundary that you drove and set yourself,” he says. Using centimeter level GPS a map is built in the system using robotics concepts.

Quinn said the program is designed to stop if it sees anything in its path for safety purposes. Within an open area it will continue to complete the striping while the landscaper turns their attention to the weeding, edging or other tasks. “If you're just going to job site and you have four or five people in a box truck, you can now do it with two or three and put those other people on the other jobs,. This is definitely where you're hurting for labor,” he adds.

Through its Greenzie Go program, the company is offering an opportunity for Atlanta area contractors to subcontract some of their larger turf areas to Greenzie. The robotic mower will come out and do the mowing while the remaining staffers will handle the edging, weeding and other aspects of the work.

“We come out with our prototype and we use it to mow the lawn under supervision so that you can get a feel for it,” Quinn says. Although generally intended for the Atlanta area, he jokes that they would transport the mower to more exotic areas such as Hawaii. “This season is all about mowing as many lawns as we can with our technology as well as continuing to develop it.”

His team is focused on the prototype and completing the first phase of development. There are options for more direct object detection for future versions.

Every aspect of the program is checked and rechecked and engineers ride on the mower during tests to ensure it is completely safe. “We'll jump off for demos and when we're in a controlled environment when we know there's nobody around, because we know that the machine works,” he said.

For now, Quinn says they are not focused on those issues. “It's in our product road map and I'm the one who keeps pushing it backwards. My team wants to do it and I always say 'we'll get there but not quite right now,'" he says.

For now, there is no exact timeline for release of the software. Quinn and other members of his team will be at GIE+EXPO in Louisville, sidled up in the Swift Straw boot #262. However, be on the lookout for him to be heading to booths to discuss his software with other manufacturers..

“We're, focusing all of our funds on the product and product development and less on marketing,” Quinn says. “We are hyper focused on making our products super safe and basically just better and better.”

Despite his optimism, many in the industry are skeptical.  “They should be,” Quinn said. “I believe several companies have tried this before and failed.” He is confident it will work now based on where the software and robotics technology is today and the method Greenzie is using for the algorithm, mapping path and planning.

“Lawn maintenance crews are just having the worst time, they work harder than anybody I know and they have an insane labor shortage and they have all this work and they can't do it,” he says “We've got to help.”

His singular focus remains to get the product to the market. “We need to get it out there,” Quinn says. “I'd love to see our technology be a behind the scenes item, just like how you buy a car and it has ABS brakes. I want every 2023 zero turn mower to include an option of Greenzie software kit at the dealer and we add it and off you go.”