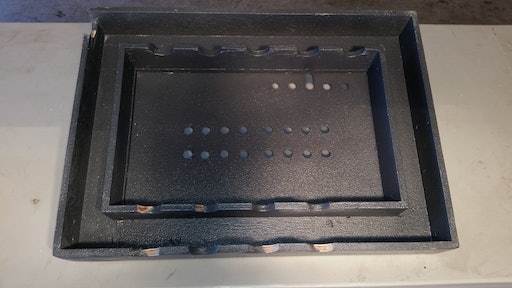 Scott Schumacher has been a landscape contractor for 30-plus years in the Reno - Lake Tahoe area. He stills contracts some smaller irrigation and landscaping jobs, but at age 56 he’s looking to back away from the contracting side of the business.

“I’ve always been an owner/operator,” Schumacher points out. “I didn’t just sit in an office as a company owner, I was the foreman of my crew. I’ve landscaped at least 500 homes in the Reno - Lake Tahoe area. I’ve built every single irrigation system my company has installed. After 30 years of this, my body is just too beat up to keep doing it.”

But landscape irrigation is one of Schumacher’s passions—and that won’t be changing anytime soon if his new venture takes off like he thinks it should.

Schumacher is the inventor of the Quick Box, a pre-fabricated irrigation valve manifold and vault. He has spent the past six years refining designs, securing patents, lining up suppliers and everything else that goes into launching a new product. But Schumacher expects his new company, High Sierra Water Systems, to be able to start delivering inventory come mid-January 2016.

Schumacher actually got the idea for the Quick Box years ago while installing irrigation systems. “I’d quickly realized that doing irrigation valve replacements on a manifold was a tough, sometimes four- or five-hour job,” Schumacher relates. “You had to dig out the box, clean all the valves and the dirt underneath them, cut them out, repair the manifold or rebuild it, reinstall it, cover it back up with the green box, and then backfill it. I said to myself, 'How can I make this easier?'”

Schumacher made it easier by building a 6x6 foundation with pressure-treated posts, and then mounting the valve manifold to the top of the foundation and covering it with a generic green box. “Everything always stayed clean and dry, and I rarely, if ever, had any repair calls,” Schumacher says. “This is where I first came up with the idea for the Quick Box.”

In August of 2009, Schumacher filed for his first patent—this time just for the foundation, or square box. A couple years later, he filed a piggyback patent that included the manifold built into the foundation, which represents the final design and what he now has a patent on. The 6x6 pressure-treated post has been replaced by heavy-duty plastic.

“It was five years of trial and error building several prototypes in order to get the design where it needed to be, and to get a patent,” Schumacher relates. “It then took another two years to go forward with the invention. But everything is really coming together now.”

A quick look at the Quick Box

The Quick Box is a pre-fabricated irrigation valve manifold and vault. The box/vault itself is made of heavy-duty, high pressure-injection plastics. The manifold is PVC and has the same PSI rating of today’s PVC fittings, Schumacher assures, while adding that PSI ratings will vary according to PVC pipe size. The manifold also has a built-in ball valve for winterization.

Stays put, clean. The Quick Box design inherently allows the box to stay where you put it. “This is unlike many of today’s traditional valve boxes that shift around and fill with dirt in a very short time,” Schumacher says. “The Quick Box also has a grate (screen) on the bottom that prevents dirt, debris and critters from getting in. However, it still allows for proper drainage.”

Easier to work with. Quick couplers (compression fittings) secure the valves and make for quick installation and replacement. The manifold can be accessed from either side of the vault simply by separating the vault and flipping the manifold over. The vault has two quick snaps along the inside wall to allow for simple separation and parts replacement. “The separation joint is constructed using a double L-channel to keep all water out,” Schumacher adds. “Additionally, the wiring sleeve keeps our wire out of the dirt and fee of corrosion.”

A Quick Box Solar version is expected to make its way to market in early 2017. It will have some additional features, such as a lid-mounted solar panel to charge a 12-volt battery. “The battery will allow you to install a valve manifold just about anywhere,” Schumacher points out. “The battery will run on an internal timer so it will no longer be necessary to run power to the valve manifold. The timer draws so little power that the battery will hold a charge through the winter months with little to no sunlight.”

The top of the Quick Box Solar version has two vents to keep it from potentially overheating during the hot summer months. It also has a quick-connect wiring box to keep all wiring clean and dry. “This feature will also make installation a snap,” Schumacher assures.

Schumacher, together with both his business partner and lead engineer, have been researching for a local company to manufacture the Quick Boxes. As is customary, they’d solicited a few bids. “An important thing for us is keeping our product American-made and helping put some people to work,” Schumacher says. "We want to put the following words on our packaging: 'Made in America, by Americans.' That’s important to us.”

Initially, come mid-January 2016 when inventory starts becoming available, Schumacher plans to sell to end-users exclusively from his company’s website, www.hsh20.com. That said, he and his partner’s vision is to eventually forge agreements with irrigation industry wholesalers such as Ewing Irrigation and Wester Irrigation Supply House.

That’s month away. For now, Schumacher wants to tear into the irrigation and landscaping trade show circuit, starting with the GIE+EXPO in Louisville October 21-24, and continue getting his name out there and exposing irrigation contractors and homeowners alike to the Quick Box. This unique approach to the traditional irrigation valve box did wonders for Schumacher when he was laboring tirelessly as an irrigation contractor. Now he’s hoping other irrigation professionals will feel the same way.

5 Key Trends in the Irrigation Industry

If you don’t grow fast enough, you can get stuck!
August 28, 2020
Irrigation & Water Management