What Makes Sense, a Dedicated Trencher or a Loader with a Trencher Attachment?

Conventional wisdom says a tool designed specifically for a given task is the correct choice. But is it? 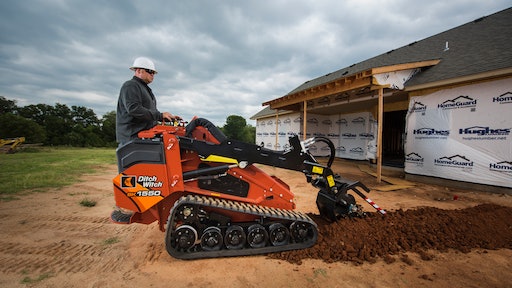 Conventional wisdom says a tool designed specifically for a given task is the correct choice. Sure, there are other options that will work, but why use anything but the machine designed for the specific job, right?

Apply this argument to the question of comparing a dedicated walk-behind trencher to a compact utility loader with trencher attachment, and the answer gets more complicated. Which is superior?

It just so happens that many manufacturers of dedicated trenchers also make compact utility loaders that are capable of using a trencher attachment... Toro, Ditch Witch and Vermeer immediately come to mind. Most allow there’s a place for both options, although there are situations in which one is a better choice than the other.

Chris Thompson, product manager for trenchers at Ditch Witch, says the choice really depends on the rental. “If your customer wants to get on the job, cut a trench and get off, then a dedicated trencher is the best choice,” he states. “But if they’re going to do other functions, a compact utility loader, or what we call a mini skid steer, with different attachments is most efficient. While dedicated trenchers are a little smaller, easier to maneuver and more efficient for trenching, mini skid steers are much more versatile. Operators can perform a range of jobs on a mini skid steer by simply switching attachments.”

Matt Hutchinson, Vermeer product manager for tree care/rental & landscape, says performance is similar between the two choices, but there’s still no substitute for a dedicated machine. “Most trencher attachments can be outfitted with either a 3- or 4-ft. boom, which is similar to the boom used on pedestrian and small ride-on trenchers. But boom sizes don’t necessarily mean a compact utility loader will have the same performance in every soil condition,” he points out. “A compact utility loader’s horsepower, available auxiliary hydraulics and chain configuration are the essential specifications to pay attention to.”

He continues, “Dedicated trenchers are designed for one application — trenching. So, the machine’s controls, design and horsepower are all integrated to deliver an optimized performance.”

A case for dedication

“The dedicated trencher obviously is a machine that is designed for trenching, while a compact utility loader is designed for using multiple pieces of equipment,” explains Tim Phelps, product manager with Barreto Mfg. “The controls are going to be generic on the loader and there’s not going to be a decal that says this is how you start the chain. Our trencher has automatic trench control and you won’t get that on a compact utility loader. The other thing with a compact utility loader is they have two big lift arms, so you have two cylinder controls to get your depth and your angle. With a dedicated trencher, there’s one cylinder control because the angle is already fixed, so it’s a little less complicated.”

He continues, “It’s harder for the operator to trench with a compact utility loader because of that. It has extra controls and they are not specific to a trencher. And there’s the fact that that you’re going in reverse while trenching, when the machine is designed to do most of its work in a forward direction. For novice users especially, I think they would have a difficult time figuring that out.”

“It’s just too much,” Phelps says. “It’s too much for some customers to get this big trailer with this big piece of equipment that they have to figure out how to hook up.

“The compact utility loader and attachment combo makes sense for an operator who has several tasks to complete and needs the use of a bucket, a posthole digger, a trencher and anything else. But familiarization on all of those pieces of equipment could be daunting to less-seasoned operators. I think contractors would be the ones most likely to be able to do that and benefit from it.”

He continues, “If you have a guy that owns a compact utility loader, he may have an auger, bucket and a stump grinder or something like that. I think that’s where you’re going to see multiple attachments being purchased, but as far as in rental, it just doesn’t seem like we’re seeing a lot of that yet.

“However, the combination does give the rental company options,” Phelps notes. “Maybe they have four or five trenchers in their fleet but they’re all out on rent and then a contractor comes in and needs a trencher, and they have a trencher attachment for their compact utility loader. It gives them more versatility, but I really think there’s probably a better market on the retail side for compact utility loader attachments than there is on the rental side.”

O’Halloran, for his part, says the real test is with regard to balancing that versatility with the cost. “Depending on what each specific rental store’s customer base prefers, it might be in the best interest of the business to carry a fleet of compact utility loaders and keep their inventory stocked with several attachments. Where a dedicated trenching machine can adequately handle most trenching applications, [a compact utility loader] is able to easily change out attachments to handle countless tasks. The major trade-off is that typically, a dedicated pedestrian trencher is less expensive than a [loader] and trencher attachment combination. This can potentially translate to lower rental rates for rental store customers, and greater accessibility for equipment-savvy DIYers, landscapers and contractors who don’t necessarily specialize in trenching work on a regular basis.”

Thompson at Ditch Witch points out that dedicated trenchers fit into tight spaces more easily and weigh less, allowing contractors to easily and simply transport the equipment with a standard trailer. “The trencher offers some advantages on that score,” he says, “but the controls on both are remarkably similar, so from an ease of use standpoint, there really isn’t a tremendous difference.”

O’Halloran adds, “Ultimately, the rental store will ideally carry an inventory of both compact utility loaders and dedicated trenching machines to ensure the proper equipment solutions are available to their customers at any given time.”

The question on everyone’s mind is always, where’s the money? In terms of ROI, which machine pulls its weight better?

“A dedicated trencher is designed to do one thing, while a compact utility loader can be used in several different applications, so they will appeal to a more extensive customer base and might be rented more often,” Hutchinson says. “However, many contractors who are in the market to rent a trencher will prefer a dedicated machine.”

According to O’Halloran, it really comes down to the customer base for the specific rental store. Compact utility loaders require a higher initial capital investment, but are typically rented at a higher rate than dedicated trenchers.

“Conversely, dedicated trenchers require less capital initially, but are historically rented out at lower rates than a compact utility loader,” he says. “Many rental stores find success in the diversification of their equipment offering to be able to provide the best solutions to their customers.”

Thompson agrees, adding, “Know your customer base. Trenchers are lower-cost machines and can start earning a return on investment faster, but mini skid steers can be rented with so many attachments, so there’s a great potential for high ROI. On the other hand, trenchers have been around since the 1940s while the market for mini skid steers is still in its infancy in rental. The machines are growing in popularity, but there’s still an opportunity to build awareness. Rental stores may need to work with contractors to shed light on the expansive capabilities of a mini skid steer.”

Hutchinson points out, “There’s usually an additional cost to rent an attachment. If a customer only needs a trencher, renting a pedestrian trencher is often a better value.”

At the end of the day

There’s certainly a time and a place for both dedicated trenchers and compact utility loaders with trencher attachments in any rental inventory.

“A compact utility loader outfitted with a trencher attachment is an excellent option for contractors that need a unit that can do a bit of everything,” Hutchinson says. “The right setup will deliver a similar performance as a dedicated trencher; however, there is a higher upfront investment to acquire the loader and attachments. Also, a compact utility loader with a trencher attachment is a bit longer than a pedestrian trencher, which can be an issue in confined areas.”

Phelps concludes, “In rental I think they definitely could benefit from having both options. I don’t think it’s a choice of one or the other.”

From a tornado through a pandemic, Vermeer Corp. remains strong for its employees and customers. Listen to this week's edition of the Grass Roots Podcast.
May 7, 2020
Excavation

Built for durability and performance, it has a centrifugal clutch drive that is bathed in oil to provide protection against extreme conditions and abuse.
E-Z Trench
March 26, 2020

Toro launches a new easy-to-use attachment that is available for over 5 Dingo models.
The Toro Company
February 18, 2020