We’re Not Kidding Around—There Are Goats in the Business

Goats are being used as a solution to natural lawn care and landscaping, and these crewmembers are more than happy to work for food. 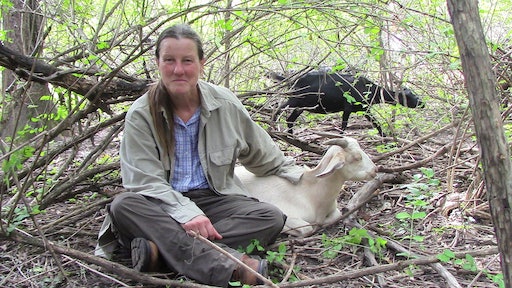 Kim Hunter, who is the owner and founder of The Green Goats, a company that serves areas of Wisconsin and Illinois, operates her lawn care company with a different sort of crew. Hunter has almost 200 goats. Depending on the size and location of the different jobs, she can adjust her ‘crew’ so that the goats will have the biggest impact. Hunter and her goats have nibbled their way through an array of properties including private homes and businesses, and even reduced invasive plants in parks and university grounds.

“I got started because I’ve always traveled around and done my own things. I ran sled dogs in Montana and I worked in the film business in California, but in between doing all those things I would come back to my parents' house in the suburbs of Chicago,” Hunter says. “They decided to move out into the country and I moved with them. The six-acre place had six-foot thistle. I was out there with a saw cutting them down and they’d fall on my head. I was miserable. Everyone was telling me to get a goat because they eat thistle.”

Besides eating thistle, Hunter discovered that another invasive weed that runs rampant in areas of the East Coast, Midwest and West, buckthorn, was a sort of a delicacy to goats.

“I brought my three little goats in on leashes and I let them loose. They ran past the grass, past the clover and jumped up and ate the buckthorn. I started to figure that other people could use this.”

From there the idea for The Green Goats was born. Hunter decided to start out with Spanish Goats, which are a more feral breed of goat. She eventually purchased a farm in Monroe County, WI, and started breeding goats. At first she went to neighbors and eventually the trend of using goats and skipping pesticides or sending traditional lawn care companies into heavily vegetated properties caught on.

“This was in 2008, so even in the recession I had this business that was steadily growing.”

On a job like the one where there were over 50 acres to be cleared just outside of Madison, WI, Hunter puts her goats in fenced areas that are around five acres big and the goats rotate throughout the whole property easily that way. Hunter says that because goats are grazers, they would typically like to eat a few leaves and move on, so keeping them in the smaller areas encourages them to basically mow the plants to the root.

“The process is that we're using goats to actually replace what was here before. A lot of people know about prairie fires, but there’s another element that people don’t think about that was here, that’s bison. Bison used to come through here and you can see it in movies like ‘Dances With Wolves’. They leave a path of destruction.” Hunter says this was a way for the soil to be rebuilt. “So sometimes I ask, can goats save the world by rejuvenating the savannas and the prairies, and if goats do that they’re the new bison.”

The goats work to kill off all the invasive plants, stressing them enough to allow for native species to push through. Goats will eat plenty of invasive weeds including—buckthorn, honeysuckle and thistle, and they’ll even eat poison ivy, which “does not respond well to grazing”.

“Buckthorn is non-native and invasive and it takes over, and we need something to eat it. So what we’re doing is the goats stress it. They’ve gone through the area once and they’ll go through again. These plants, the roots are like a bank account, and the goats eat the leaves and the plant needs to go into that bank account to re-grow. We keep bringing the goats in until hopefully that plant has to go into foreclosure. The strategy is to bring in, at the end of August or October, a tree crew and they cut down all the invasive trees. Hopefully the idea is that the plants have tried to withdraw more money and grow some leaves. Then we can kill the roots, so we can kill off 30 acres of invasive plants without using any chemicals.”

Hunter’s goats are efficient workers. Whereas when people try to use goats from petting zoos to pet goats, her goats make up an efficient crew that works daily until they get the job done. On the particular site in Madison, the goats had gone through an area that was so wooded and hilly that it would have been dangerous for a crew to come in with a skid steer and the unwanted weeds made it hard to maneuver through. Once the goats had gone through a second time, it was easier to navigate. Hunter recommended that the tree crew come in once the goats were out to use the woodchips from the stumps and branches the goats removed to line the trails.