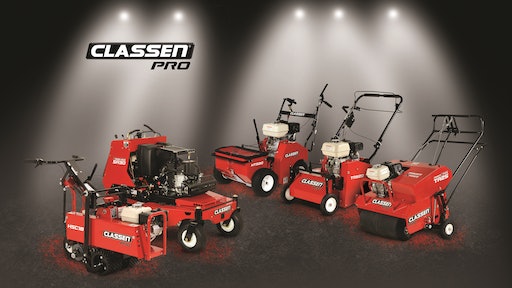 “Rental centers need equipment that will provide high utilization, and every contractor understands that completing more projects leads to more revenue,” said Bruno Quanquin, Classen vice president of sales and marketing. “The features included with the Pro line serve both industry needs by providing flexibility and productivity for tackling more work faster, as well as producing more profits through high equipment utilization. That’s why we developed the Classen Pro line.”

Classen says it incorporated multiple features to set the product line apart from competitive units. For instance, the overseeder, turf rake and sod cutter feature hydrostatic drives, which give the operator variable speed in forward or reverse.

The Classen Pro HSC18 Sod Cutter is the fastest model in transport on the market due to its hydrostatic transmission and powerful engine, Classen assures. Its Hydro-Gear T2 hydrostatic drive transmission ensures smooth, consistent power flow. It’s coupled with a Honda engine that allows the unit to reach speeds as fast as 4.7 mph, which is 35% faster than competitive models, Classen says. Paired with a powerful cutting blade at the center of the machine, the sod cutter efficiently produces sod mats that contractors easily roll up.

“The hydrostatic transmissions are a major feature in the Classen Pro line,” Quanquin said. “They’re easy to maintain, which makes them ideal for rental centers, and they generate enough speed so contractors can complete projects quickly.”

Classen also incorporated its patented split-drive system into the Pro PowerSteer walk-behind aerator. It’s one of the only walk-behind units with power steering, Classen points out. The split-drive allows the engine to power dual tine shafts independently for enhanced maneuverability during aeration. This results in a unit that turns easily while operating close to hydrants, trees and shrubbery.

In addition to the hydrostatic drives or power steering, many Classen Pro products feature anti-vibration handles and vibration dampening into the equipment, which reduces the intensity of vibrations transferred from a machine to the operator. This allows the operator to more easily take on large projects where they might be using the equipment for several hours.