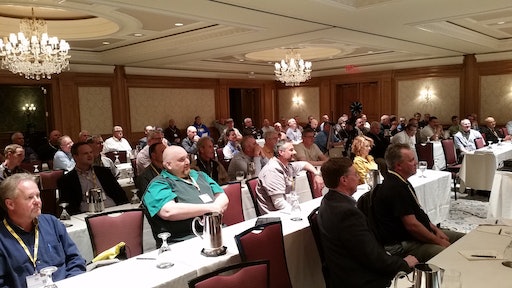 Sponsors of this year's EETC conference, which was attended by roughly 105 industry professionals, were Kohler Engines at the platinum level; Echo, Hydro-Gear, Multiquip and Toro at the gold level; B3C Fuel Solutions and Oregon at the sliver level; and Elenco, Honda Engines, KPM Exceptional and Marr Bros. at the bronze level. Next year's event will be hosted by Stihl in Virginia Beach, VA. It will be the first EETC conference Stihl has hosted since 2001.

The Equipment & Engine Training Council (EETC) was founded in 1996 to help address the shortage of qualified technicians in the outdoor power equipment industry. Some 20 years later, that shortage is still glaring—perhaps even more so. The EETC has been making progress, though. Membership is growing, income is up, and new products and outreach initiatives are being developed and deployed.

"We have some good momentum going," said Erik Sides, executive director of the EETC. "We're seeing growth and are also having success in retaining members. This year is shaping up to be the biggest ever in our 20-year history."

On that note, the EETC Annual Conference, held April 6-8 in Kohler, WI, marked the association's 20th anniversary. After hitting some bumps in the road in prior years, the EETC appears to be back on a very firm footing, poised to take its mission of attracting a new generation of small engine technicians to the proverbial next level.

The EETC has enjoyed a 27% increase in overall membership over the past year, growing from 211 members to 269. Here's a look inside the numbers:

As you can see, the number of member schools has jumped significantly—which is very important because high schools and technical colleges serve as the primary vehicle by which to attract and train new technicians. The more schools that are involved, particularly high schools, the better the odds of seeing more young people pursue careers in this industry.

On the flip side, member growth in the equipment and engine supply chain (manufacturers, distributors and dealers) has been more modest. Furthermore, when comparing to data from 10 years ago (2006), manufacturer membership is about steady, distributor membership has been sliced in half, and dealers are down significantly from 262 to now 80. On the bright side, school membership has more than tripled over the past decade.

Why, though, don't more suppliers support the EETC? After all, isn't it the manufacturers, distributors and dealers who collectively share this urgent need for small engine technicians?

"I attended the EETC conference a few years ago, and am checking it out again this year," said Bruce Tallman, technical services manager at Walker Manufacturing. While Walker isn't currently an EETC member, Tallman said it's easy to recognize the importance of the mission. "The EETC is trying to address the need of getting more people interested in a career in this industry. That seems like something a manufacturer would want to look at supporting because if it helps the industry, it helps the manufacturer."

Eddie Anderson, Stihl's technical training supervisor, feels the same way. "It's about feeding the pipeline," Anderson said. Stihl and other manufacturers have their own training initiatives to ensure that dealership technicians know how to service their equipment. "By supporting the EETC, then, we're helping ensure that new technicians understand the basics when coming into the industry." Stihl is a current EETC member.

And what about dealers? There were 262 members in 2006 but only 80 today. "I think this really comes down to, 'What's in it for me, the dealer?'" said Ed Cole, an EETC executive committee member who'd retired from Toro in 2012. In other words, with all of the other service training requirements placed upon them by the numerous manufacturers they represent, the typical dealer might have a hard time seeing the tangible benefit of joining and supporting the EETC, even though the yearly membership due is a mere $60.

"I'll tell you what's in it for the dealer," Cole continued. "The EETC was founded in 1996 because there was concern over the growing shortage of technicians. That was 20 years ago. I'll tell you, it is far, far worse today. Baby boomers are retiring and there is nobody to take their place. It's going to be a huge, huge problem that most people won't come to realize until it is right there in front of them."

Every new member—and donation—make a difference. In order to develop the necessary training tools, tests and communication outreach programs, the EETC needs resources. The executive staff and board have been working hard to get the association on a more secure financial footing. That footing is looking as stable as it has in a long time, leading Sides and his team to feel good about what can be accomplished over the next couple of years.

Income was up 44% in 2015 and net income was up over 500%, making last year the EETC's best ever from a financial standpoint. Sides pointed to membership growth, increased study guide distribution and an uptick in certification testing as the primary reasons why.

This year is off to an impressive start, Sides added. A substantial deal with the state of California for study guides/certification testing, an e-learning initiative along with new training products such as Echo's Two-Cycle Engine Kit, are helping to drive income. "With everything we have in the pipeline, this could end up being our biggest year ever," Sides said.

As a non-profit association, the EETC is now looking for ways to invest some of that money to help advance its mission of finding and training as many new technicians as possible. To that end, the EETC Board voted to approve the hiring of Hector Velazquez of Hector's Shop to assist in the development of training materials, i.e. videos, as well as help lead the association's website, marketing and social media efforts. Velazquez will also help out with tradeshows and other event-type marketing. The addition of Velazquez to the EETC staff will free up Sides to focus on growing membership, technician recertification efforts, school accreditation and re-accreditation efforts, and overall growing the EETC.

Now is the perfect time for the EETC to really hit its stride and grow. Brian Melka, president of Kohler Engines, gave the keynote address at the recent EETC Annual Conference in Kohler, WI. Melka talked about the many reasons to remain optimistic about the future of the outdoor power equipment industry, while also recognizing some of the key challenges it faces.

"Our workforce is aging, with countless experienced technicians retiring or nearing retirement age," Melka said. "Engines are becoming more complex in many respects, requiring an updated skillset in order to service and maintain them. Finally, interest in hands-on technical careers is waning among many jobseekers."

Melka reflected on his childhood in the 1980s. "When things broke at our house, we fixed them," he related. "But those skillsets are no longer instilled in our younger generation. For many years they were de-emphasized. They were not considered sexy enough. But here we are, 30 years later, and we are feeling the effects of a generation that has not seen these roles as honorable ones you can raise a family on, like my father did with my brothers and me."

And here we are, 20 years since the EETC was first created. The technician shortage still exists, to say the least. The EETC's mission to address that shortage is still necessary and noble. A handful of leading manufacturers, distributors and dealers continue to support that mission, but hundreds if not thousands still do not—for whatever reason. Now positioned as strongly as it has been in many years, Sides and the EETC staff are hoping to begin putting those reasons to rest.

EETC On a High