Sometimes you must fight the urge to go BIG in order to improve productivity, employee pride, and of course, profitability. 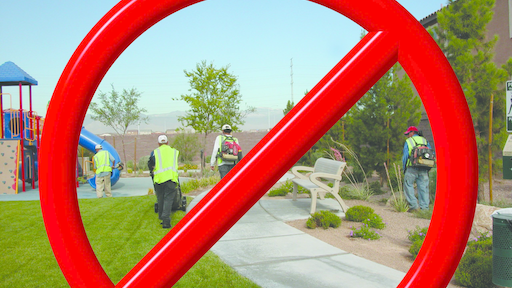 Many landscape contractors make the mistake of putting too many people on a maintenance crew. Others have found that small crews are almost always the most effective, even on large properties. There are certainly exceptions to the rule, such as sprawling condominium communities or HOAs. Even in those instances, you can make a two- or three-man crew work—if your staff understands their role and buys into the small-team concept. And for your average apartment complex or smaller condo community, there is just no reason to put more than three people on it.

The main reason most maintenance contractors go with larger crews is out of fear—fear that a smaller crew will not be able to complete the job as quickly while also performing all of the detail work and quality control checks. But truth be told, the more people you have on a crew, the less personal accountability each employee has. That doesn’t mean employees aren’t working. On large crews, guys are more than likely staying busy. It’s just that they likely aren’t being as productive as they could be.

For example, if you estimate a job for 8 hours of mowing, 12 hours of trimming, and 4 hours of edging and blowing, it’s critical to ensure that each crew member is being as efficient as possible. With a five-man crew, you might have one guy mowing, two guys trimming, and two guys edging and blowing. With that many employees, it’s hard to determine where any inefficiencies are. If the job doesn’t get done in the allotted amount of man-hours, who is to blame? Which one of the two guys wasn’t fast enough on the line trimmer? Who was too slow edging?

On a smaller crew—where one guy is mowing, one is trimming, and one is edging and blowing—it’s easy to go right to the source when a task doesn’t get done on time. You can easily look at the allotted man-hours used when bidding the job and immediately identify the failure. Keep in mind that it’s not always the employee who is at fault. The estimator may have mis-measured (or guessed wrong in too many cases). But at least the problem is quickly identified, giving you a chance to rectify the issue before finding out three months into the contract that your margins have disappeared.

Sometimes two crews are better than one

Another reason why some contractors can’t resist the urge to assemble large crews is because they have one or two really big properties that could use more bodies. So they assemble a large, five- to seven-man crew. The problem is that on the rest of the route, the properties are normally sized. These properties only need the typical two- or three-man crew. When a five-man crew gets on these properties, they are tripping all over each other.

On that note, it might be a good idea to take a look at adding crews. In certain instances, two small crews are more effective than one big crew. In other words, split the big crew in two. Recognize that you don’t need huge capital expenditures to do that. You could buy an older truck without all of the fancy bells and whistles, along with a smaller trailer. You likely already have the equipment to put on that trailer. The cost of this additional truck, which includes fuel and insurance and upkeep, may still be outweighed by the added expense of fielding a larger, more inefficient crew. So it could prove to be a good investment.

For example, if you had a three-man crew assigned to small or medium-size properties, you could easily make it a two-man crew. Then the third guy, in that cheaper truck you just bought, could become his own one-man crew to handle all the small banks, shopping centers and gas stations where one person can get in and out in 30 or 40 minutes. That’s a big time savings when compared to the 15 or 20 minutes a three-man crew might take (45-60 minutes), especially when factoring in the unbillable drive time associated with each job.

It makes sense that smaller crews, sometimes one-man crews, can be highly productive on smaller properties. But what about those large jobs that require 25 to 30 man-hours? Perhaps you can have several small crews gang up on those properties.

For example, you have one of those sprawling condo complexes that takes a five- or seven-man crew an entire day to complete. Have two or maybe even three of your small crews show up in the morning to attack the property. Depending on the makeup of the property, you might have five or more machines knocking out all of the mowing in just a couple of hours. Then the extra crews take off to complete their day’s schedules. That was just a route stop for them. The original crew assigned to the property can stay all day and finish the trimming and blowing and detail work.

Another possible approach is to have a two-man crew spend two to three days servicing a large account. This may prove to be more cost-effective than having a five-man crew spend one long day there. Because of the increased personal accountability discussed earlier, the smaller crew will likely be more efficient and get the job done in less time. They will also likely develop a stronger affinity for the property and take more ownership. The end result is better craftsmanship, plain and simple.

What’s good for the client AND your company

Every property manager has his or her own quirks about how they want things done, so be sure to consult with them to go over your options. But don’t be paralyzed by fear to the point that you fail to consider options that are best for your company. The fact is, putting smaller crews on larger properties more often could prove to be a win-win. Many property managers will appreciate the fact that you are on their property more frequently, helping to address those little things that often pop up, such as a downed tree limb, litter that needs to be picked up, etc.

Making wholesale changes in your operation, such as downsizing crews, can bring a lot of resistance within your staff. Some of the resisters are people who simply do not want to be held accountable for their performance. At the same time, you will likely find employees who are genuinely good, productive workers, but just hate working by themselves. You will also find people who absolutely love working by themselves.

Consider holding a team meeting in a casual setting, such as a company picnic outing. Explain the reasoning behind your new approach to crew sizing—which includes how doing so will positively impact your employees, i.e. better job security, opportunity to make more money, etc. Also point out that there will indeed be an adjustment period, because everyone will need to do a little adjusting. This isn’t a punishment, it’s an opportunity.

It’s All in the Details

How to Save Thousands in a Single Day