Rental Country’s four locations across South Jersey have helped arm landscape contractors with everything they need to make quick work of both mowing and hardscaping projects. 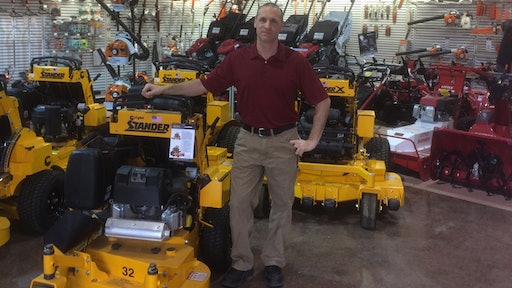 Rental Country was one of the first area dealers to begin carrying stand-on mowers when it took on the Wright brand in 2004. “We had tried a couple of other zero-turn riding mower brands in the past, but nothing could seem to catch on,” says Jeff Anconetani, Rental Country’s vice president of operations. “But we had been a big Stihl dealer for a long time, so we had a lot of landscape contractors who were regularly coming to us for Stihl equipment, parts and service. We couldn’t figure out why we couldn’t get going with lawnmowers. Then we decided to try the Wright stand-on mowers and they really took off.”

The southern New Jersey market is ideal for stand-on mowing, Anconetani points out. There are a lot of tight properties that contractors need to get in and out of quickly, yet they need something faster and more productive than a walk-behind.

“What we saw in those early years was that a landscaper would start off with a smaller 36-inch stand-on, giving him a big step up from a standard 21-inch push mower,” Anconetani recalls. “But the 36-inch size was still small enough that he could get through backyard gates and efficiently handle smaller landscaped properties. In time, though, that landscaper would come back to us for another machine, this time a larger 52-inch model to handle the other types of properties he also had to mow.”

Nowadays, Anconetani says, up-and-coming landscapers don’t even want to talk about walk-behind mowers, which Wright also offers. “All they want is a stand-on,” Anconetani says. “For a growing contractor who finds his portfolio reaching the 30-yard mark, he realizes he’ll need to either hire another employee or find a more efficient way to mow his properties. To him, the answer is a stand-on.”

Anconetani says it’s quite fascinating to look around his market area. “There are stand-on mowers everywhere,” he says. “Sometimes you see two or three on a single trailer. It definitely has become the mowing method of choice for landscapers around here.”

That said, the stand-on mower has yet to catch on with other end-user groups. “Homeowners with smaller yards still want the typical 21-inch walk-behind mower,” Anconetani says. “For those homeowners with larger yards, they’re going to just buy a sit-down rider. I did sell a stand-on to a farmer once, but really we’re talking about landscape contractors who benefit from stand-on mowing.”

That’s just fine with Anconetani and crew. After all, they first took on the Wright brand 12 years ago in an effort to provide more to their landscape contractor customers. Speaking of which, in addition to Wright and Stihl, Rental Country also sells Honda, Scag, Billy Goat, Little Wonder and Briggs & Stratton.

Outside of lawn and garden, Rental Country is also a dealer for Wacker, MBW, Dixie Diamond and Jenny. Tool/equipment rentals continue to represent roughly 60% of total dealership sales across the four locations. A lot of those rentals are going to landscape contractors.

“Equipment sales and rentals go hand in hand very nicely,” Anconetani says. “Landscapers often come in to rent skid steers, excavators, compactors or aerators. Then they’ll see our mower displays and start looking around. Sometimes our loyal mower customers will come back to us when they need to rent something to complete a landscaping project. We do a lot of rental business with paver contractors.”

Of course, Anconetani is quick to point out that nothing would happen—neither sales nor rentals—without great employees. Fortunately for him, many of Rental Country’s employees have been with the dealership for 20-plus years. Most have been there for at least 10. “We all know our product lines very well,” Anconetani says. “People know that they can come in here and get their questions answered. That makes a huge difference with customers.”

Another thing that makes a huge difference, from the dealer’s perspective, is having a solid distributor you can count on. “For our Wright mowers, our distributor is KPM Exceptional based right here in New Jersey,” Anconetani says. “They provide outstanding support, not to mention insights into the market to help us stay on top of trends. If we ever have an issue, they help to quickly resolve it. That’s very important for dealers today.”

Another thing that’s important to many dealers is a strong family. Like so many of today’s successful power equipment dealerships, Rental Country is a family business. The dealership was founded in 1981 by Jeff’s mother and stepfather, Gary and Betty Galloway. Jeff is also joined in the business by his stepbrother, Ryan Galloway, who is also involved in sales while also wearing many other hats from time to time.

Rental Country’s first location was in Vineland, located roughly 35 miles west of Atlantic City. A second location opened four years later far to the south near the coastline in Cape May Court House. Five years after that, they moved north up the coastline and opened a third store in Egg Harbor Township, followed by a fourth location in Sicklerville in 2001, its northernmost location. All four stores continue to operate today, giving Rental Country strong coverage across South Jersey.

The urge to answer a call, eat on the road, or forget to buckle up can become unconscious habits. But the habits can be devastating. Learn how advanced tech can help.
October 23, 2020