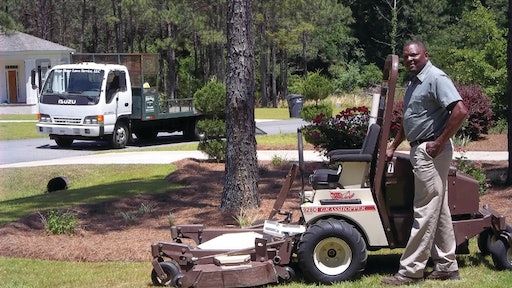 Chris Shipp has been mowing lawns for three decades. Having so many years of experience under his belt taught him how to be successful from several perspectives: how to service customers, how to be profitable, and how to sustain a business year-round.

Only 44 years old, Shipp started mowing lawns with his grandfather at the tender age of 12. He continued mowing lawns throughout high school and later started operating his business under the name Shipp Shape after a high school teacher told him he had done a “ship shape” job with his lawn. “Instead of going to work for someone in high school like everyone else, I created my own job,” Shipp relates. “My business continued to grow, and I eventually decided to operate full time in the Green Industry.”

Shipp Shape’s breakout year came in 1992 when it landed a contract to maintain the grounds for a local peanut blanching corporation. As Shipp explains, the work gave him “lots of good exposure around town.” Ten years later, the company won an even larger contract with a local municipality and has been mowing its parks, sports fields, office buildings, cemeteries and roadways ever since.

Mowing accounts for nearly 75% of Shipp Shape’s annual revenue and keeps eight employees busy throughout the mowing season from March through September. Yet, one of the keys to Shipp’s success has been his ability to retain four core people year around with irrigation installation repairs, which bring in another 15% of revenue, in addition to landscape maintenance and renovation, and fertilizer and weed control, which adds another 10%.

Shipp explains, “After the mowing season slows down in October, we begin to apply a pre-emergent to control weeds and perform fall landscape maintenance duties such as trimming shrubs and picking up leaves. That’s where the vacuum systems on our mowers come in handy. During the peak growing season, however, most of our customers want the clippings returned to the soil, or they use the clippings as compost. Customers want to be environmentally friendly.

“In winter months we renovate lawns, clean flowerbeds and add pine straw,” Shipp continues. “Later we apply a post-emergent for weed control and start our fertilizer regimen, and by April, we’re in the swing of cutting grass.”

Shipp Shape offers landscaping and irrigation and repair services all year long. Since his coreless aerator doesn’t leave behind unsightly cores, he says crews can aerate virtually any time during the growing season, as well. The aerator attaches to one of the company’s five out-front Grasshopper mowers.

“We offer the service to both our residential customers and the local municipality for its sports fields,” Shipp adds. “Residential customers like their yards aerated because it provides a better medium for absorption of water and fertilizer, and makes their lawn green and lush. Aerating sports fields creates a better medium for growth, but also creates a softer soil for athletes.”

Even though the local municipality is Shipp’s biggest customer by far, his company has a nice balance of commercial and residential accounts, just under 100 customers in all. Commercial accounts are on contracts whereas residential customers seal the deal with a verbal agreement.

“Sometimes we do things a little differently down here,” Shipp admits. “I’ve been working a long time with many of my customers and our word is as good as a contract. You can do a great job and have all the right equipment, but if your word isn’t good and you don’t deliver good service, work will disappear. I’ve been fortunate to have several longtime customers and, in some cases, have their children as customers, too.”

During the summer growing season, Shipp Shape crews visit customers weekly, and even during the offseason most residential customers still see a crew at least once a month. Depending on the service offering, commercial customers may drop back to bi-weekly visits in the offseason.

No matter what part of the country you’re in, mowing and maintenance is very competitive. Using the right equipment has helped Shipp Shape maintain its competitive edge. “We’ve been using Grasshopper diesels since 1994,” Shipp explains. “The diesels are great for fuel economy, which helps our profitability. In fact, we use less than half the fuel with diesel engines than we would with gasoline engines, saving us around $13,000 a year. Needless to say, this really helps the bottom line, as does a diesel engine’s longevity, which means we don’t have to purchase mowers so often.”

Matching equipment to application has also been helpful, Shipp adds. “A rotary broom has proven extremely useful for clearing sidewalks after we mow and edge. Crews mow along miles of sidewalks for the city, and they previously used backpack blowers to clean them. Now they use a rotary broom, which we have found to be three times more efficient.”

Shipp operated out of his home until he outgrew his space. The company has since purchased a facility in the city comprised of a 40’ x 80’ building that has two bays, a 20’ x 40’ shelter and two 20’ x 20’ offices. Continued growth is part of the business plan, especially since his 19-year-old son Trey has the same interest in horticulture and lawn maintenance. Still, Shipp doesn’t foresee any great changes in his marketing strategy. “We advertise on a billboard in town and sponsor high school teams. Our best advertising, though, comes from satisfied customers who refer us.”

This proud owner says there are no secrets to his success. It’s service first, followed by offering a variety of services to generate year-round work and having the right equipment for the application. The formula has allowed him to keep his business, just as the properties he maintains, in shipp shape.

'Inquiries Are Flocking in': Sheep Advertised as Ride-on Lawn Mower