Tips to help expand from residential to commercial 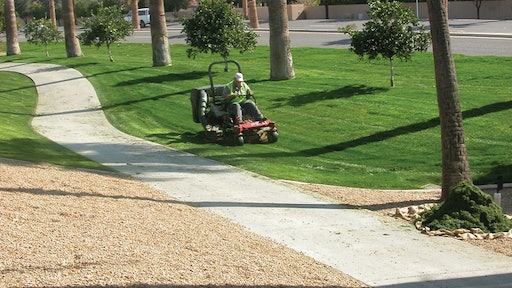 A lot of big, commercial maintenance contractors first got their start in the residential market. They "started small" with homeowners, and ultimately responded to demand from local businesses. That was 10 or 20 years ago, though. Expanding from residential into commercial requires some serious planning today.

Contractors also have to think about their margins. While the dollar volume can be considerably higher in commercial, the profit margin is typically much lower—and nowhere near where it used to be.

Goldman says numerous contractors have recently come to him for advice. Commercial clients the contractors have been servicing for years are asking the contractors to re-bid. "Some of the industry's largest maintenance companies are coming in for one-third less in many instances," Goldman says. "There is a little bit of a price war going on in the commercial market. The big guys are trying to buy market share."

A contractor should identify those potential commercial clients that will respond favorably to the things that make him different. "A prospective customer that isn't the big Intel or Pfizer type of client is more likely to have what I call ATD, attention to detail," Goldman explains. "They want their property to look as nice as possible."

This is important for contractors who've spent the majority of their careers serving residential customers. "Residential contractors are used to spending a lot of time doing finesse work," Goldman says. "When you get into the commercial market, finesse work is neither here nor there. It's usually about getting in, getting it done and getting out. If you're used to doing finesse work, and want to continue doing it because it's what sets you apart, you have to find those commercial clients that will want to pay for it."

Those clients do still exist, Goldman is quick to point out. It might be a smaller, locally owned facility such as a bank or retail store. "Residential contractors can still find their way into this market," Goldman says. "It's not easy—but it's possible."

Training. You'll probably have to spend time retraining your crews because some employees might not intuitively understand how to make the transition from residential to small commercial.

In small commercial, you bid a job at X number of hours a week. "Your guys have to be in and out in that time," Goldman says. "They can't spend extra time on that finesse work if it isn't in the budget. Margins are just too tight in commercial maintenance to keep adding unbillable time to a property."

It's about exposure. "When you're mowing Mrs. Jones' yard, you can break her kitchen window," Goldman relates. "When you're working at a commercial property, can you break six car windows in three minutes of string trimming."

It's not just about protecting your own company either. The commercial client you are working for wants to see that additional insurance. They likely want to be named as "additional insured" on your policy. That all costs a lot of money—and the result is higher premiums which you will have to pay.

Proactive service. Commercial clients also tend to want more consultation. There is a lot more site reviewing that has to take place as compared to residential accounts.

"When I was in commercial maintenance, we walked a property once a week—over and above the time the crew was there," Goldman relates. "It didn't matter how big the property was either. Then, once a month, we walked the site again—this time with the client. I had a standard form we used to check things off and jot down notes. This was great because it allowed us to not only let the client know that we really cared, but also pick up some additional work once in a while."

Another thing Goldman did years ago, which more and more commercial maintenance contractors are doing today, is send reports to clients. Goldman tells, "After a crew visited a property, the foreman had a standard form he filled out which detailed the work that was done. The foreman then left that report for the client. Nowadays it's easy to email that kind of report."

How often you do that is open for debate. Goldman thinks a weekly report, in most cases, is going to prove to be too much in today's faster-paced environment. "It's incredible how many things property managers and other business owners are looking at every day," Goldman says. "If there's something immediate that you feel needs to be done within the next week or sooner, by all means reach out to the client with an email and/or call. Beyond that, I'm still a big fan of that end-of-the-month property walk-through with the client present. That's really more effective than any report you could send them."

Quick response. The biggest thing is being responsive when the client needs you. "If you get into the commercial market, you cannot be the one-man show anymore," Goldman says. "When a commercial client calls you, the name of the game is response time."

When a commercial client calls you for an estimate, for instance, you have to show up right away. The market is just too competitive to dilly dally around at a pace that suits you.

Response time is just as critical after you land an account. "When a facilities manager calls you because he wants something done, he expects to see you the next day," Goldman says. "In residential, you might get away with saying, 'I can be there in a week.'" Thus, if you're running a small operation and don't have any admin or sales support, living up to the standards of commercial property managers can be tough.

WAC Corporation of Greenville in Greenville, NC, has been in the commercial maintenance arena for more than 20 years. Co-owner Corey Handley says the best advice he can offer is to avoid surprises. "If something isn't in the specs that you think should be in there, bring it to the property manager's attention right away," he says. "The property manager wants that property to look nice, but does not want any surprises or additional charges. You simply can't nickel and dime them in today's economy."

Handley says it's also important to understand that if it rains, or you're short a crewman, or your mower breaks down, etc., it is your problem, not the client's. They don’t want to hear your sob story—and shouldn't have to. "This is why a lot of owner/operators have a tough time in commercial," Handley says. "They have a hard time reacting in these situations."

A final piece of advice is to network with other service providers. "A commercial client does not want to spend their time looking for several contractors to take care of all of their needs," Handley points out. "If they ask you to clean gutters and you can't do it, you better find someone who does that you can work with."

Communication, relationship and making it work

Whether you're responding to an urgent voice mail, emailing a monthly report or conducting a property walk-through, the primary objective is to maintain a solid communication cycle. The big thing in commercial maintenance is building that relationship.

"Commercial work is relationship-driven, and the idea is to secure an account and then keep that account for a number of years," Goldman says. "The longer you're on a job, the more efficient you become. That's when you can start making good money."

If you're still thinking about trying to jump into commercial maintenance, Goldman says you absolutely have to know your numbers. When you know your numbers, you don't get off on the wrong foot by lying to yourself. For example, if you look at a property and your numbers tell you it will take two hours, don't try to convince yourself that you can do it in one.

"Bigger is not automatically better," Goldman reminds when referring to the allure of higher-dollar commercial work. "Bigger is usually riskier, though. That's why your numbers have to be really solid. You must have total control of what's going on."

New Radio Show Looks at Business Side of Contracting