Two Managers and a Sub

Georgia landscape company has a unique business model that made sense during the recession, and still works well today. 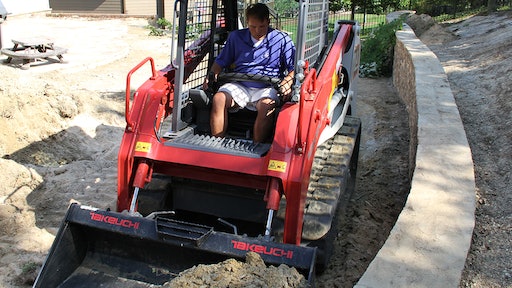 The owner of Sugar Hill Outdoors in Auburn, GA, says he’s not your typical design/build contractor. He’s not just talking about the beautiful work his company does either; he’s also referring to how it gets the job done.

Clint Tucker, ASLA, doesn’t work out of a huge facility, although many of his projects number well into six figures. He doesn’t have a hundred employees, only three, and his equipment lineup includes a Takeuchi track loader, two Toro Dingo utility loaders, and a couple of trucks. His primary office isn’t back at headquarters, but instead inside his truck cab, which is equipped with a laptop computer, hot spot, and a printer.

How does Tucker do it? He gets it done with an office manager, an operations manager, and one subcontractor, someone he’s been working with since he started in business in 1998. The arrangement with the sub is straightforward: Sugar Hill Outdoors provides the material, and the subcontractor, who provides all the labor, gets paid per material used, e.g., plants installed and blocks and pavers laid.

It wasn’t always like this. Tucker, who graduated from the University of Georgia in 1996 with a degree in landscape architecture, operated a more typical company with several crews, trucks, and lots of equipment until the 2006-7 downturn.

“At the time, we worked with a few builders and had a client list that also included several high-end homeowners and a handful of commercial properties,” Tucker recalls. “The recession didn’t shut us down totally, thanks primarily to our commercial work. But it slowed us enough that I didn’t have work for all my crews.”

So Tucker pared down his crews and set up a subcontractor relationship with a longtime employee who then handled the remaining work. It worked out so well that Tucker decided to keep the new business model in place after the economy turned around.

The key, Tucker notes, is having a subcontractor who relies on you, and vice versa. “I try to keep him busy, and he’s always very responsive," Tucker adds. "Getting paid as he does, crews don’t waste any time either, yet they’re held accountable for their work." In return, Sugar Hill Outdoors doesn’t have the labor challenges (though workers wear the company’s hat and shirts while on projects), and other overhead costs are sharply reduced. Tucker’s operations manager, Dusty Roper, oversees the work, which frees up the owner’s time to sell and prepare designs.

After graduating from the University of Georgia, Tucker worked two years for Cla Allgood, the owner of a large design/build company. “I was taught how to design and draw in school, but didn’t learn much about how to run a business,” Tucker recalls. “Cla gave me that education. After spending two years working for him, I learned how to manage money, perform estimates, and deal with customers, all of which I continue to put to good use.”

Tucker puts an emphasis on dealing with customers. “I’m a huge relationship person and view every prospective client as a potential friend and a salesperson. I get nearly all my work from referrals and cannot afford to have even one unhappy customer out there. Especially today with social media, it’s very important to communicate with customers and make sure their expectations have been met, or better yet, exceeded.”

To facilitate the design process, Tucker relies on three software programs: AutoCAD, Realtime Landscaping Architect and SketchUp. “I still draw and can put together sketches on the spot for customers,” he adds. “But I rely on the computer to prepare more formal and professional renderings, landscape plans and presentations, and to quickly sketch 3-D drawings." As an authorized Belgard contractor, Tucker can also send hand sketches to Belgard which, in turn, will create a design for free.

Since having outdoor living space continues to be a popular trend in Georgia, it’s no surprise that designing and installing hardscape features accounts for approximately 70% of Sugar Hill Outdoors’ annual revenue. “Pizza ovens, grills and fireplaces have become staples for my residential customers,” says Tucker. “Installing retaining walls has picked up recently because most flat spaces available for building construction have disappeared.

“Although we’ve experienced plenty of rainfall over the last few years, my clients still recall the serious drought of 2007," Tucker continues. "They are also well aware of what’s going on in California so there’s more interest today in hardy, drought-tolerant plant material and upgrading irrigation systems to conserve water.”

Tucker points to another significant trend: a boom in the building and construction industry. “Construction projects, both in the residential and commercial markets, have really taken off this year. As of the middle of August, I still have about a month and a half of work in the pipeline, not counting a very large contract we recently signed with a builder.”

That’s both good and bad news. It's good news because it keeps Tucker's subcontractor busy. It’s bad news because there’s only so much work he can handle; the labor market is just as challenging in Georgia as it is in other parts of the country.

During the 2007 downturn, many design/build contractors without another service offering such as maintenance were forced to close their doors. Sugar Hill Outdoors didn’t offer a maintenance service, but instead created the seeds for a new business model that works to this day.

That single move kept the business going, but cash flow was still an issue. Fortunately, Tucker’s wife Shannon worked for IBM (and she still does from home). The owner also had previous experience in the building industry and found work remodeling rental centers.

Kenai Companies, a new venture with a cousin this year to remodel basements, promises to add some diversification to Tucker's service offering. Down the road he would also like to bring a small nursery in house to supplement plant material needs.

In the meantime, when not working, husband and wife are likely driving son Logan, 13, and daughter Katie, 10, to various sporting events. “We love to watch them play lacrosse and soccer,” says Tucker, “and my son and I go fishing when we can.”