One Yard at a Time

Raising Men Lawn Care Service aims to not only improve the community landscape by teaching children the value of hard yardwork, but also the lives of the elderly and disabled, single mothers and veterans. 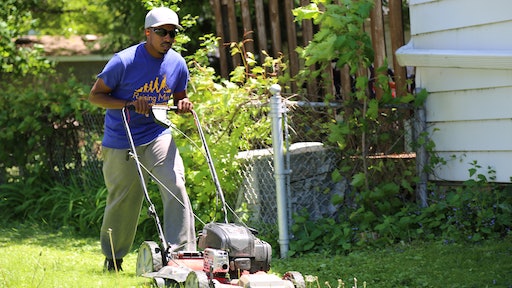 A 26-year-old Alabama A&M college student, Rodney Smith, Jr., never in his life imagined Raising Men Lawn Care Service—only two years in the making—would get so big so fast. The community youth lawn maintenance program is now nationwide, up to eight chapters (in states from Alabama to Florida to Michigan to Texas to Ohio and Tennessee), with about 150 participating kids and more than 58,000 followers on its Facebook page. Smith himself has more than 94,000 supporters on his personal Facebook page.

Raising Men Lawn Care Service aims to pair the service of lawn maintenance free of charge for military veterans, the elderly, single mothers and people with disabilities, who may lack the time, ability or resources to maintain their own yards, with a mission to help raise young boys and girls into upstanding men and women. The program does this by simultaneously teaching kids, ages 7 through 17, the responsibility of yardwork, in addition to the importance of community service, all while providing the free lawn service to those who may not be able to do it themselves.

Smith says, “We mow lawns free for the elderly, disabled, single mothers and veterans. In the fall, we rake leaves and, in the winter, we do snow removal, shoveling driveways and sidewalks,” so the initiative lasts all four seasons—every season for which these sometimes fixed-income populations could use the help.

“Giving back to those in need is a big thing that we believe in. Because a lot of the elderly are on fixed incomes, they really can't afford to pay someone to mow their grass,” notes Smith. “We come across a lot of elderly people who have citations from the city because they just can't afford for anyone to maintain their yard.” So rather than forcing these populations to pay someone to maintain their grass to avoid a citation, Smith’s brainchild allows them to use that money to go toward more important things, like medication or whatever the case may be for that family.

How It All Got Started

Smith came to the United State is 2009 from Bermuda, where people helping people—or the Bermudian way—is a way of life. He started attending J.F. Drake State Technical College in Huntsville, Alabama. Then, in 2012, he graduated to across the street at Alabama A&M University where he proceeded to graduate in 2016. However, it wasn’t until during his last year getting his bachelor's degree in computer science that he discovered his true passion—helping people.

And that’s how the inspiration for starting Raising Men Lawn Care Service was born. Back in 2015, Smith noticed an elderly man outside struggling to mow his grass. Smith pulled over to help the gentleman out. That night, he got the idea to begin cutting grass free for the elderly, disabled, single mothers and veterans. He set his first goal at 40 lawns by the end of winter. Considering he was a college student, he thought the challenge reasonable.

But his enthusiasm proved more powerful than his pragmatism. “I reached 40 lawns so quickly that I upped my goal to 100. Then a month and a half later, I reached my hundredth one and came up with the idea of Raising Men Lawn Care Service,” he remembers. By now, he estimates that he’s cut more than 2,000 lawns as he somehow finds the time to help out almost every day of the week—even in between college classes.

It was after that fateful moment—seeing an elderly man struggle to mow his grass and stopping to help him—that he decided to return to Alabama A&M to work on achieving a master's degree in social work. Now he’s starting his second and final year of the program. After that, he hopes to run Raising Men Lawn Care Service full time. Of his decision to go back to school and dedicate his resources to running the program after graduation, he simply says, “That's just the way I was brought up. Help where you can. I guess you could say that's where my love for helping people came from—the Bermudian way.”

At one point, Smith accomplished a 50 States, 50 Lawns Challenge, an initiative he came up with to assist at least one veteran, disabled or elderly person, or single mother in every state. Not long after that and finishing mowing his hundredth lawn, he asked himself how he could get children involved and interested in his project. That idea evolved into the 50-Yard Challenge. If youngsters want to participate in the challenge, all they have to do is take a photo with a sign saying, “I accept the 50-Yard Challenge” and send the image to Raising Men Lawn Care Service. In return, the children receive a white T-shirt with the group’s logo, along with eye and ear protection.

From there, according to Smith, “Once they cut 10 lawns, they get an orange shirt; once they cut 20, a green; 30, a blue; 40, a red; and 50, a black shirt. Once they reach 50, we fly down to them to give them the black shirt. We also give them five of the different colors of Raising Men Lawn Care Service shirts, a certificate and a brand-new lawn mower. We have kids nationwide who are taking part in this challenge and we also have two young men in England taking part.”

This karate-type color-reward system is intended to “show our children (our future) that, by helping others, they too can receive a sense of accomplishment, and an increase in self-esteem, moral value and purpose within themselves. The message we want to instill is, no matter how young or old, small or tall, and regardless of cultural background, they are capable of whatever they put their mind to. From learning to use a lawn mower to raking leaves, we work to instill a deep sense and appreciation for team work, camaraderie, leadership and listening skills,” according to the Raising Men Lawn Care Service website.

Approximately 150 children—from ages 7 to 17—participate in the nationwide program, while about 60 kids make up the Huntsville chapter alone. Some parents sign their children up and some children reach out to the Raising Men Lawn Care Service website on their own. Regardless, the result is the same. Smith has an opportunity to not only help military veterans, the elderly, single mothers and people with disabilities with their yards, but also children with their skills and generosity, which may pay it forward to the world in terms of them teaching others as well. Really, it’s a gift that keeps on giving.

“The [children] want to give their time to make a difference in the community,” so Smith reinforces that giving back to the community is honorable and reaps rewards. He says, additionally, “We try to teach them leadership and social skills, and how to work as a team because they work with other kids. We try to teach them that they, too, can make a difference, one lawn at a time.”

And while teaching the kids about being a responsible community member, Raising Men Lawn Care Service also teaches them about safety when maintaining lawns. Not only does the program provide safety equipment, but Smith also pairs children with adults, so there's no safety issues. He reassures, “We're right there next to them, making sure nothing happens.”

More than a One-Man Show

As resourceful as Smith is, Raising Men Lawn Care Service is not a one-man show. While the program doesn’t charge for its services, the expenses for gas, equipment and traveling must still be paid, so the organization accepts donations, including funds from Briggs & Stratton. The engine maker also contributes equipment, Murray and Snapper lawn mowers, for example, to the group. Smith says the Snapper lawn mower, which the company donated to him for his 50 States, 50 Lawns Challenge, is his favorite piece of equipment because “it's such a powerful machine. It mows on any terrain. It's just cuts beautifully.”

“When I came to Wisconsin on my 50 States, 50 Lawns Challenge, [Briggs & Stratton] had about 70 employees come out and we mowed more than 60 lawns in that one day because they accepted the 50-Yard Challenge. Completing over 60 lawns in one day is a beautiful thing,” Smith fondly says. “I'm very appreciative of them because they made it happen.”

The Future Is Looking Bright

So how did Raising Men Lawn Care Service get so big within a couple of years? Smith says it all happened by word of mouth and the power of social media: “People share our stuff on Facebook and word gets around. We even went viral; two different pictures got a million likes. So we take pictures and put it out there, and people just share it.”

With that kind of natural marketing, not to mention the numerous radio and newspaper gigs Smith juggles, his plan is to continue to expand, add more chapters and get more kids involved. Next summer, he’d like to mimic the 50 States, 50 Lawns Challenge on a larger scale by expanding it to Seven Continents, Seven Lawns. The intention would be for him to travel to each continent, and mow a lawn for someone who's elderly, disabled, a single parent or veteran. He’d spend four days on each continent—two days mowing, and two days going to organizations and schools to talk to kids, inspiring them to mow for others who may need help.

If you or someone you know may benefit from Raising Men Lawn Care Service, please feel free to fill out a form on its website at weareriaisngmen.com, where supporters can also donate to the cause and children can sign up to participate.

After Lawn-Mowing America, Rodney Smith, Jr. Plans to Take on Every Continent

More Than a Mow-and-Go Crew