Florida-based Rood Landscape was tasked with eradicating invasive plant materials that had colonized around the Jupiter Inlet Lighthouse, a historically sensitive site in Palm Beach County. 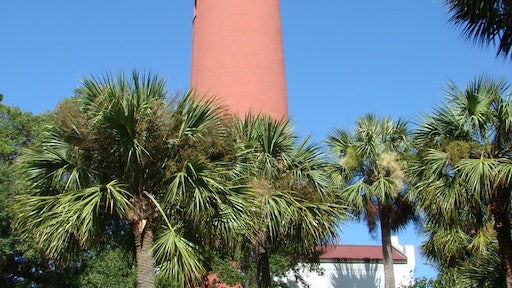 Bruce Dawson (left) of the Bureau of Land Management and Ron Vekeman, project manager from Rood Landscape, at the Jupiter Lighthouse site.

The prize was awarded for the Jupiter Inlet Lighthouse Project, an environmentally and historically sensitive site in Palm Beach County. Rood Landscape was tasked with eradicating invasive plant materials that had colonized around the lighthouse, preventing future soil erosion, and providing an appropriate plant palette for the site’s proximity to the ocean environment.

Rood also faced a unique challenge: protecting the native Indian-shell mound the lighthouse was built on. “As the site has enormous archeological significance, no digging could take place without an archeologist present,” reported project manager Ron Vekeman.

The “exotic” sansevieria at the site was carefully removed, and after an erosion control geo-grid fabric was applied at the north side of the lighthouse to assure stabilization, the new planting took place. A plant palette of approved native plants was chosen for their ability to withstand the site’s environmental elements, including proximity to the coastal waterways and the Atlantic Ocean. New irrigation was provided by Rood Landscape’s sister company, Treasure Coast Irrigation.

PLANET's Environmental Improvement Awards program is designed to reward independent interiorscapers and landscape and lawn care professionals who execute superior projects. The overall Grand Prize is awarded to one project nationwide, which demonstrates expertise and superiority in the Green Industry.

“We are honored to be this year’s recipient of the PLANET Awards Grand Prize, and are thankful for the opportunity to contribute to such a valuable project,” said Tom Balling, Rood Landscape president, of the Jupiter Inlet Lighthouse Project.

Rood Landscape was founded in 1964 by local pioneer Roy S. Rood. Owners Tom Balling and Scott Fay strive to carry forward Rood’s legacy of excellence in the Green Industry, employing over 150 landscape and irrigation designers, managers and installers. The company and its leaders put a constant focus on core values, social contract, and commitment to outstanding customer service.