Police learned of a potential car theft from a landscaping company after officers inquired about a truck in a hit-and-run. 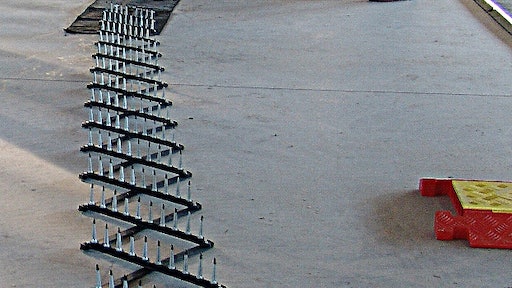 A Ridgefield, Connecticut teenager’s joy ride in a stolen car involved two hit-and-run accidents before being ended by a spike strip, police said.

Wilton police learned of a potential car theft from a local landscaping company, Andy Stewart Landscaping Design, after Danbury, Connecticut officers called the business’ owner to inquire about one of his trucks, which was purportedly involved in a hit-and-run accident.

Danbury police said that the car, which bore an Andy Stewart Landscaping Design logo on its side, had fled the scene of a two-car accident in Danbury around 2:50 a.m.

Though Danbury law enforcement attempted to pursue the evading vehicle, the chase was eventually called off after the stolen vehicle continued to increase its speed and the pursuit was eventually deemed “too dangerous” to continue, police said.

A later search of the business’s parking lot in Wilton revealed that the vehicle in question, a 2013 Chevy Silverado with the business’s emblem emblazoned on the side, was missing.

Tween’s Landscaping Business Increases after Neighbor Calls Police on Him