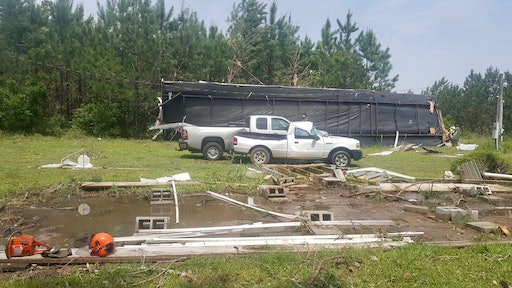 A home, ripped from a concrete foundation by high winds, damaged two trucks and blew into a row of pine trees where it eventually stopped. Fortunately, there were no fatalities as a father and his young child crawled out of the debris from a small hole in the end of the home.
Rotary Corporation

Recent tornadoes in and around Odom, GA, less than 50 miles from Rotary Corporation’s world headquarters, brought about a team effort to help residents cleanup the devastation and move forward.

Here is a collection of photographs of the cleanup efforts. Saws and gear were provided by Rotary Corp. while UMCOR scheduled and coordinated the cleanup project. According to David Smith, Rotary’s Copperhead Chain Saw Team worked on seven different sites during the two-day “mini mission” trip. With the aid of other volunteers, Smith estimated the Rotary team performed approximately $10,000 of work at no cost to residents. “We were able to help folks during a special time of need. This is what it’s all about,” said Smith. “And UMCOR did a fantastic job, as always, overseeing everything.”Rotary Corp. 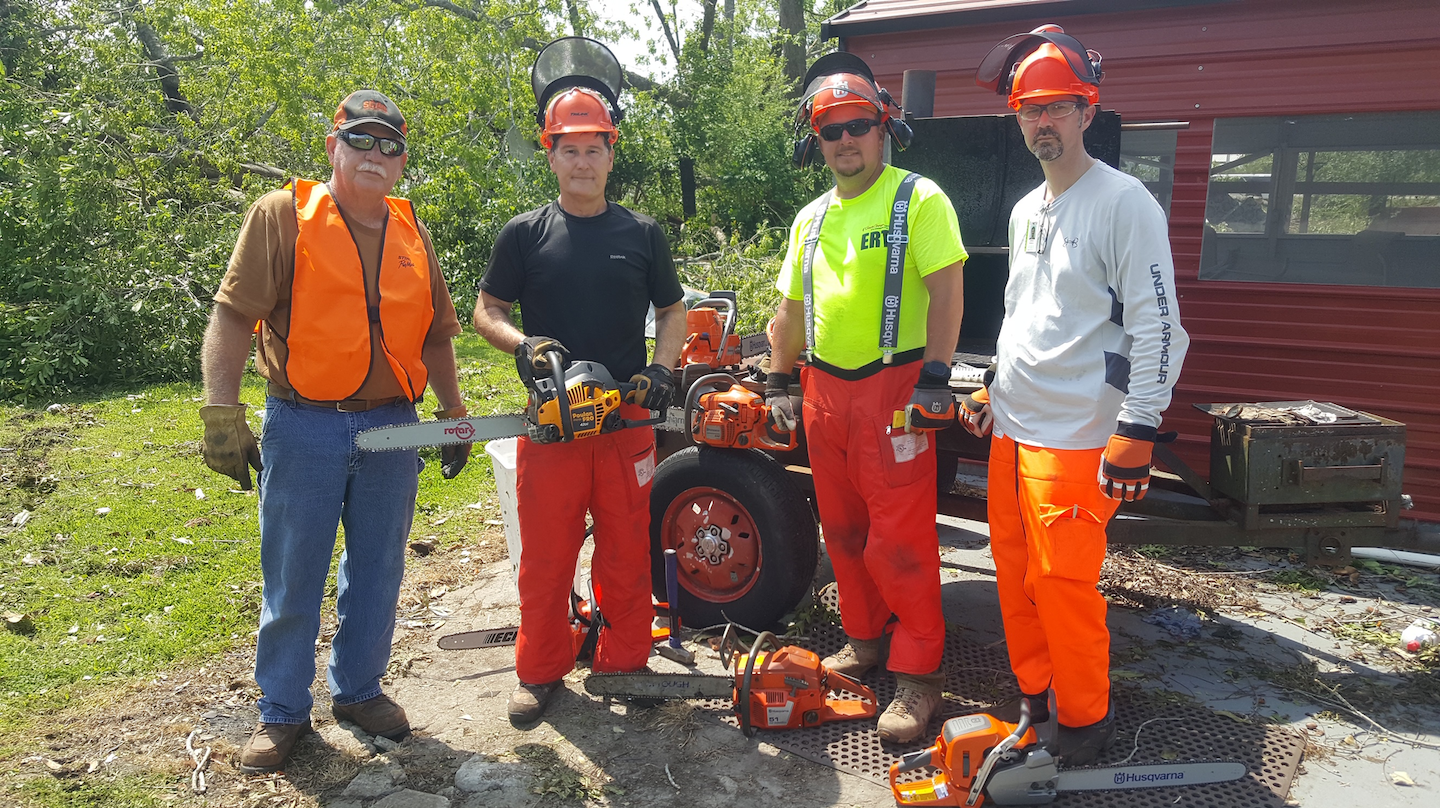 Some members of the Rotary Copperhead Chain Saw Team including James Tucker who is shown on the left. Tucker is a retired outdoor power equipment dealer from Fitzgerald, GA and a longtime Rotary customer. “James sharpened, tuned and repaired saws throughout the day to keep the team up and running. He was a tremendous asset,” noted Smith whose brother Daniel (far right) was a skid steer operator.Rotary Corp. 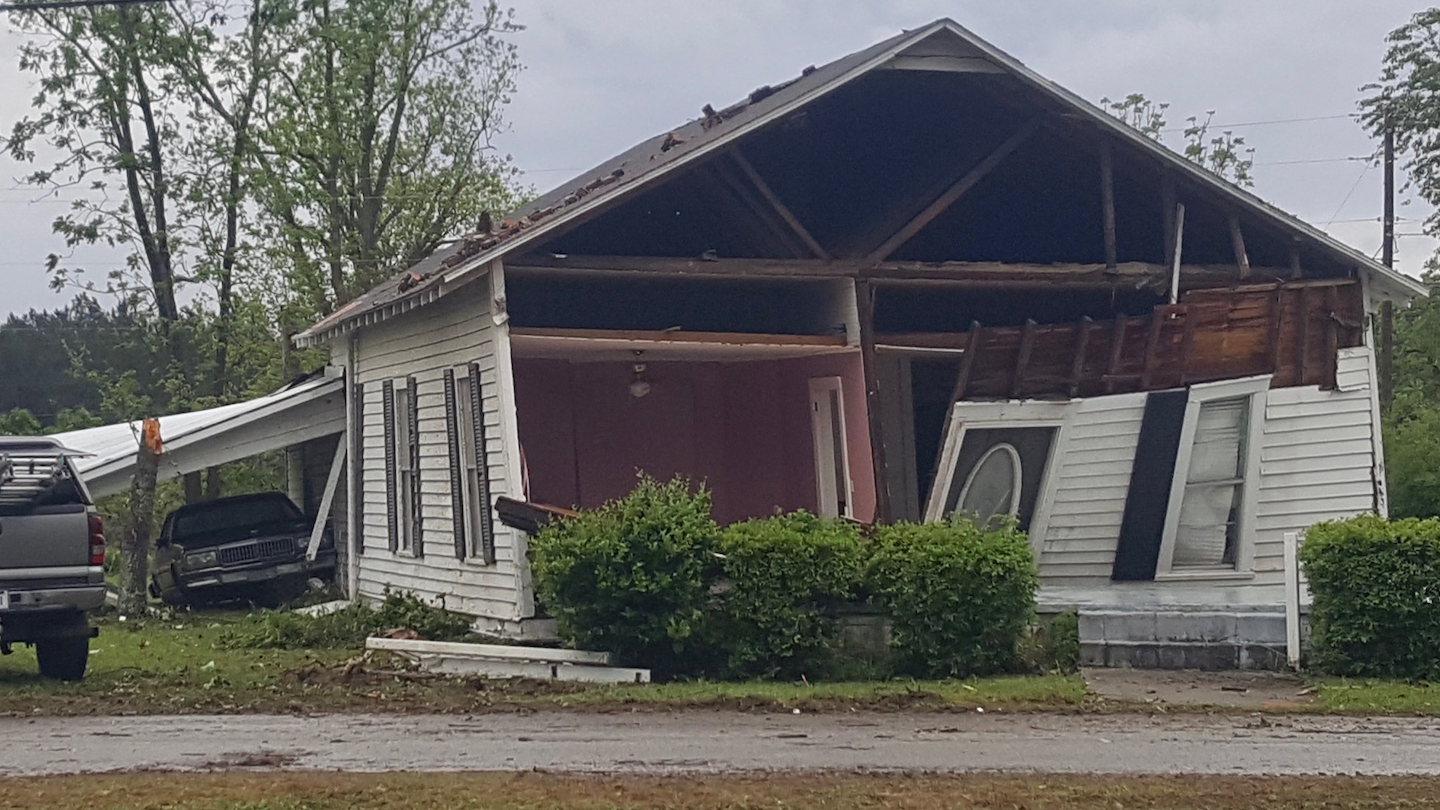 Several large pecan trees were cut and removed from the area. This family’s home was blown off its foundation and will require extensive work to become livable again.Rotary Corp. 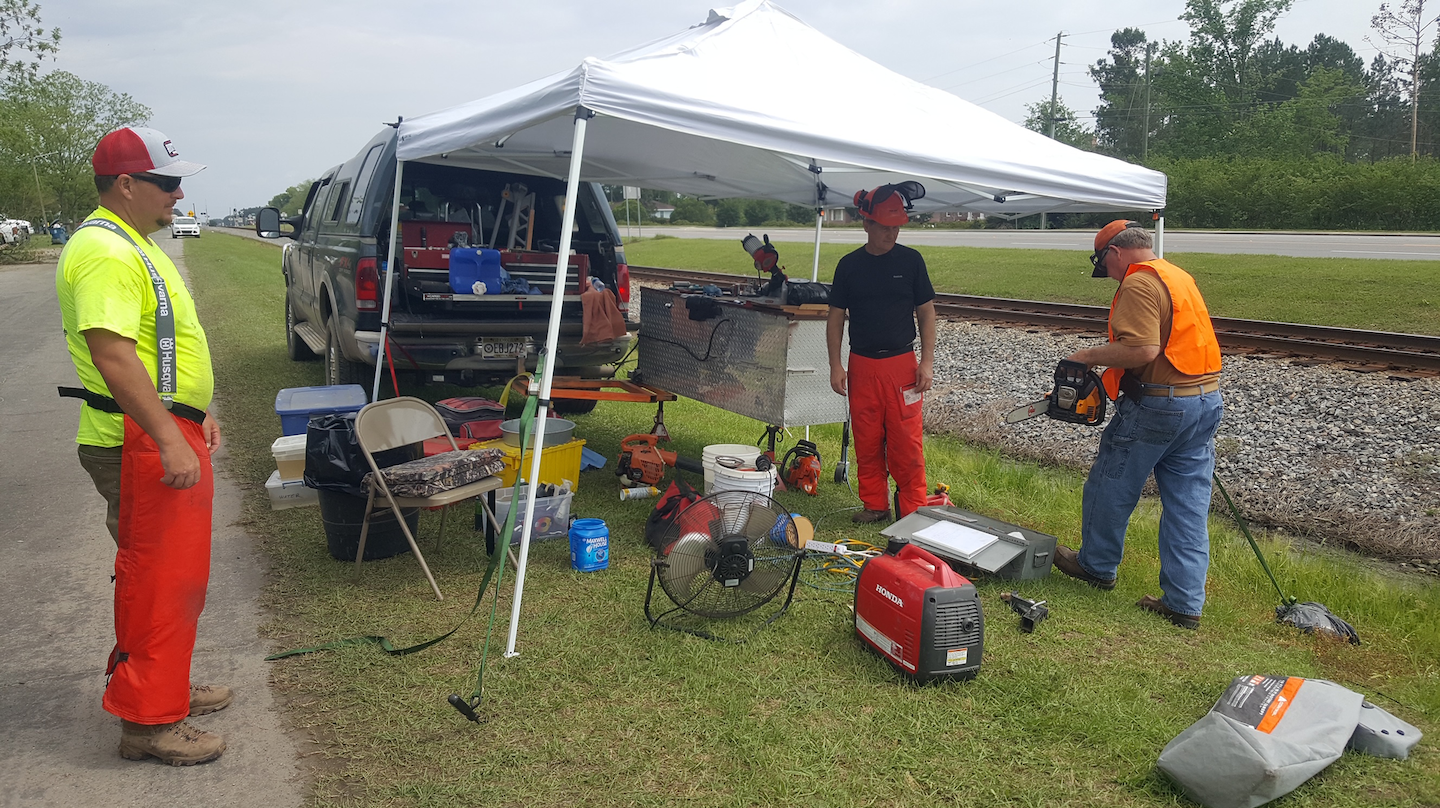 A “mini saw shop” was setup underneath this tent for maintenance and repairs. Altogether, five volunteers worked on the Rotary team during the two-day cleanup.Rotary Corp. 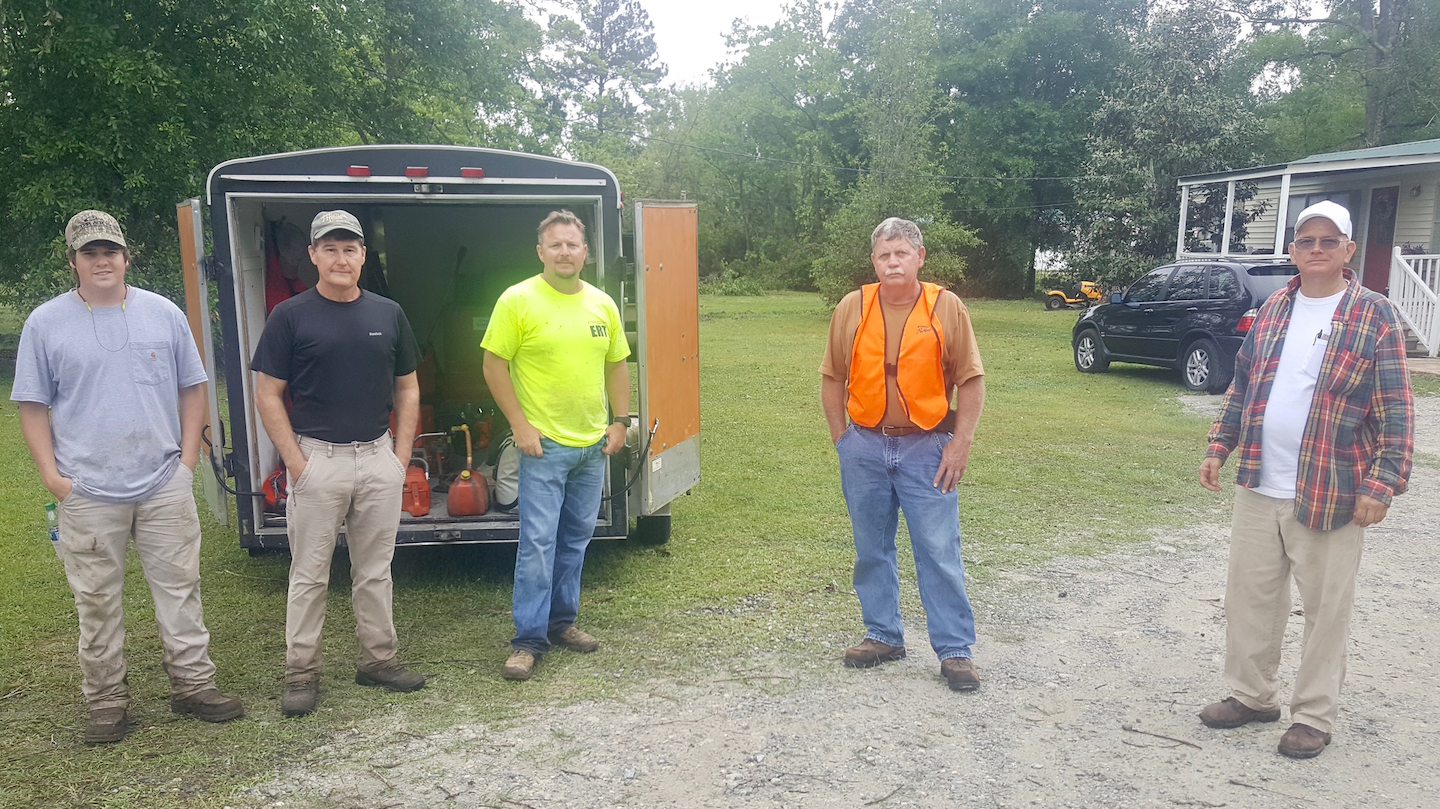 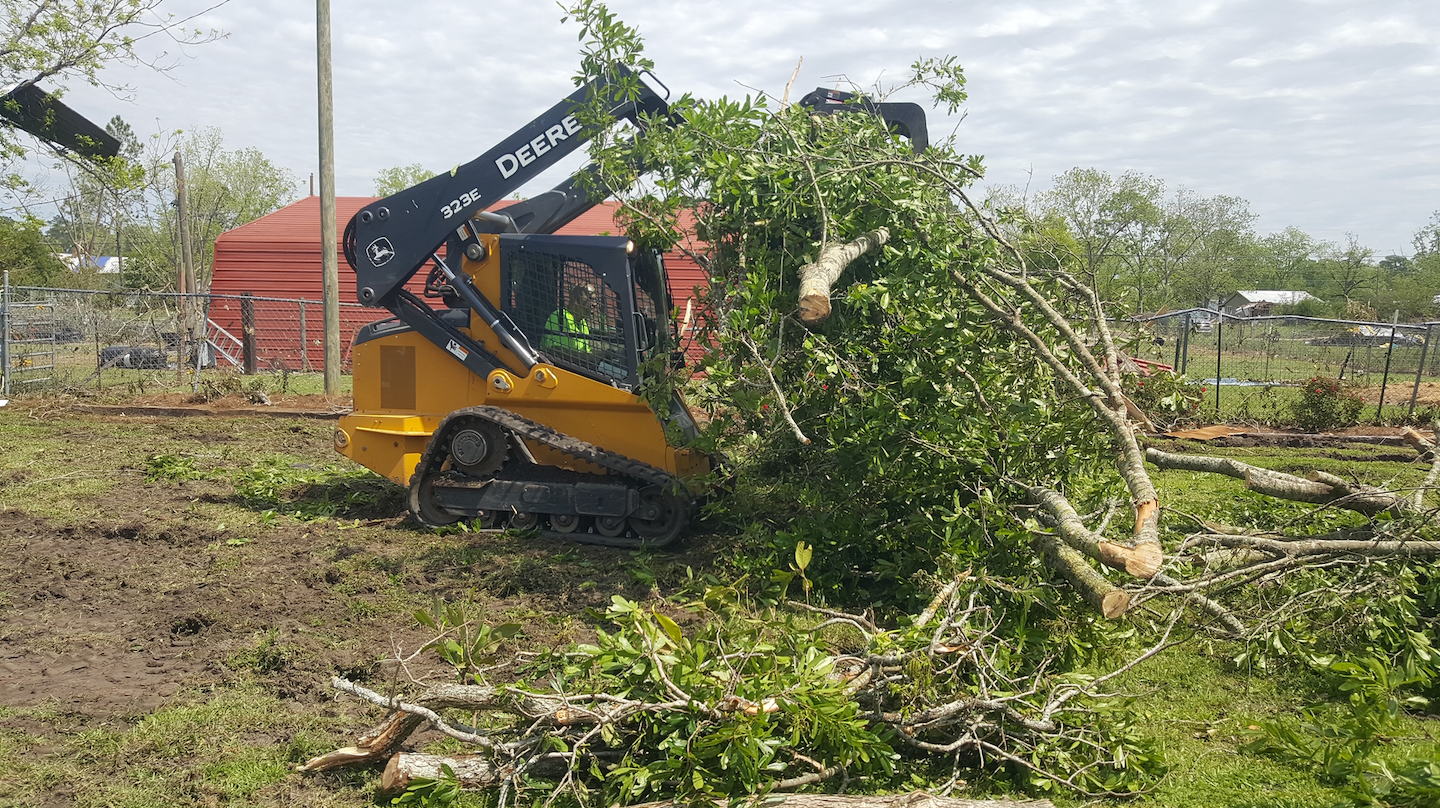 Daniel Smith operating his skid steer to help with debris removal. “Many people came together to help others - folks they did not even know. It was a special show of love for families who have lost so much,” David Smith concluded.Rotary Corp.

In 2017, Bishop assumed his most recent role as Branch Director at Pacific STIHL.
STIHL Inc.
October 29, 2020