Honda marked the 30th anniversary of operations at its Swepsonville, NC, facility by announcing a new $8.5 million investment in plant operations to innovate production processes and add new products. 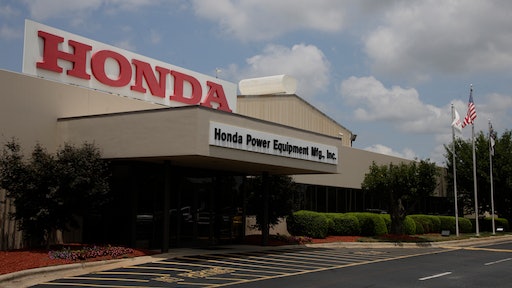 Honda Power Equipment, Inc. (HPE) marked the 30th anniversary of operations at its Swepsonville facility by announcing a new $8.5 million investment in plant operations to innovate production processes and add new products. Among other changes, the plant will add a new line for the production of two-stage snow blowers and prepare for the addition of Honda generators to its already diverse production lineup.

“We are celebrating 30 years of success at Honda Power Equipment Manufacturing because of the everyday hard work of our power product associates in North Carolina,” said Takuji Yamada, Honda COO of North American Regional Operations. “Our founder, Soichiro Honda, believed that we could make people happy through technology. Now, many years later, Honda is still focused on using unique Honda technologies to help people get things done.”

The Swepsonville plant, which today employs more than 600 associates, has produced more than 30 million products using domestic and globally sourced parts during its 30-year history. Currently, 155 domestic and international manufacturing component suppliers work with Honda Power Equipment; 45 of those suppliers are based in North Carolina. Honda Power Equipment has purchased nearly $500 million in parts from North Carolina suppliers, and the company says they will continue to work closely with the local community as the Honda business grows.