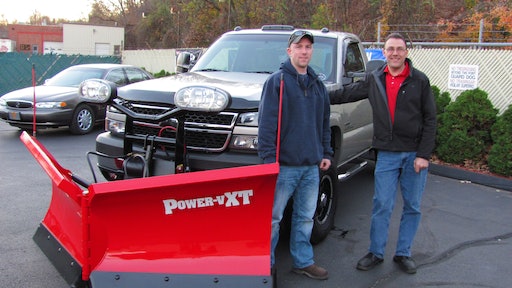 Connor Hedge, a 24-year-old full-time firefighter and part-time snow removal contractor located in Westfield, MA, is the proud owner of a new Power-V XT Snowplow, one of two Grand Prizes in the Heavy Metal Sweepstakes sponsored by The Boss Snowplow and Gravely in September. The snowplow was recently installed by Boss distributor Ken’s Auto Sales in Holyoke, MA.

Hedge was one of more than 8,000 participants in the raffle-style Heavy Metal Sweepstakes, which invited current and new Boss and Gravely Facebook fans to play online and receive daily tokens to bid on popular gear and valuable prizes, including a Gravely Pro-Turn mower, the second Grand Prize in the sweepstakes. Players who “Liked” the page received a new token each day and earned bonus entries for inviting a Facebook friend to play. Prize winners in the sweepstakes were determined through a random drawing at the end of the promotional period.