A look at the 2014 Toyota Tundra and Tacoma pickup trucks 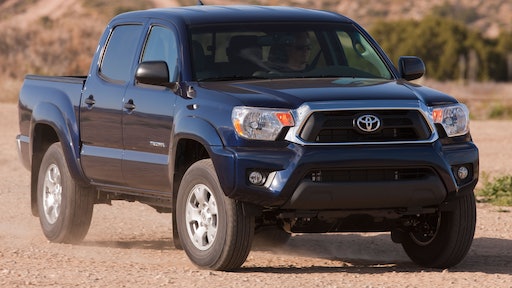 Toyota says its 2014 Tundra half-ton full-size pickup truck adds dramatically bold elements of design, refinement, quality and craftsmanship, while building upon Tundra’s well-known reputation for reliability, efficiency and function, making it the most stylish, value-driven and capable Tundra yet.

'Chiseled' exterior design. The new front design integrates the hood and grille for a chiseled and modern industrial image. Designers increased the size of the front fascia and tightened up the surfaces and character lines to visually punctuate Tundra’s pulling power and wide stance. The grille has a taller, bolder look, visually connecting the upper intake to the lower bumper. The front lower bumpers are now a three-piece design, allowing for lower replacement costs. In addition, the fenders and wheel wells have been squared off for a wider and more sturdy stance.

More comfortable interior. Ergonomic improvements include easier driver access to controls, as reach to the audio and HVAC controls has been reduced by 2.6 inches. Large knobs have been retained so they can be operated with or without work gloves. Overall passenger comfort was improved with a new front and rear (CrewMax) seat design and improved front-seat ventilation.

With a wide array of models and options, Toyota says its Tacoma has found great success as a work truck or play truck. The Tacoma line offers a choice between four-cylinder and V6 engines, and 2WD and 4WD drivetrains, along with numerous cab and bed styles.

Performance. The 2014 Tacoma model line offers two engines: a 2.7-liter Dual Overhead Cam (DOHC) four-cylinder that produces 159 horsepower and 180 lb.-ft. of torque, and a 4.0-liter DOHC V6 that provides 236 horsepower with 266 lb.-ft. of torque. Both engines employ variable valve timing with intelligence (VVT-i) to ensure strong low-end and mid-range torque. Towing capacity is 3,500 pounds standard, and 6,400 or 6,500 pounds with the V6 Tow Package on the Double Cab and Access Cab models, respectively.