Michigan contractor cuts salt usage by 50%, and adds a new revenue stream in the process. 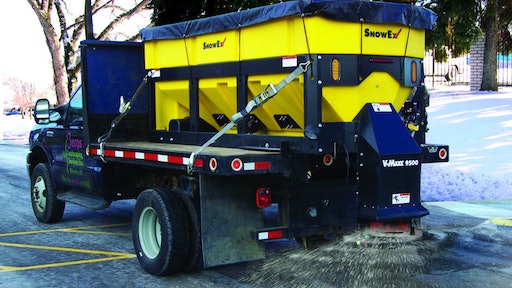 With salt prices skyrocketing and clients looking to control costs, some snow and ice management contractors are pre-wetting their granular deicers with a brine solution before spreading them. Using the same equipment, many are also trying the anti-icing approach, spraying brine onto pavement before a snow event.

Jim Berns, founder and president of Berns Landscaping Services in Warren, MI, is one such contractor. “I’d been looking to get into liquids for quite some time, mainly to add anti-icing services to my offering,” Berns relates. “When salt prices starting going through the roof, I knew I needed to do something soon to also reduce my materials cost.”

Last year Berns complemented his SnowEx V-Maxx spreader with an AccuSpray system (same manufacturer). Through separate controls right in the truck cab, the AccuSpray system allows operators to spray brine onto granular deicing materials such as rock salt before they hit the spreader’s spinner, hence the term “pre-wetting.” Then, for anti-icing procedures, a separate set of fan nozzles allows operators to spray brine directly onto the pavement.

“We have a large brine supplier in the area we buy our product from,” Berns relates. “I’ve learned that there are a multitude of suppliers who carry brine, but the recipes vary greatly. The thing I like about our supplier is that we’re given an MSDS sheet, which is very helpful when dealing with the commercial market. I can verify that what we’re using is a quality product that is less harmful to the environment.”

Berns stores his brine in a 6,500-gallon tank at his facility. As a general rule, the tank is completely refilled once it’s depleted to a level of roughly 1,000 gallons. “That way we know we should always have enough of a supply to handle any storm that comes our way,” Berns says.

The science behind pre-wetting

After the brine is sprayed onto the granular material, it is more likely to cling to the target surface, rather than bouncing or blowing away. This helps minimize material waste and achieve a consistent application on roadways and parking lots.

“I’m not putting too much salt down and getting a white parking lot,” Berns points out. However, he says the biggest benefit has been the significantly lower material costs. In fact, by pre-wetting, Berns reduced his salt usage by 50% last season.

Additionally, pre-wetting produces quick results in cold conditions. To work, deicing materials need to attract sufficient moisture from the environment. When temperatures drop below freezing, there is little moisture available for salt to initiate melting. Pre-wetting the salt ensures that enough moisture is present to facilitate the process, and the results are noticeable.

“When I look at my lots after we put down a pre-wetted salt, it can be 15º F and my lots are wet,” Berns relates. “I look at competitors who are just using salt, and their lots still have snow cover and slush.”

As Berns points out, there is a real science behind pre-wetting. However, while this tactic works well in cold temperatures, it’s another story when the mercury rises. “We might not want to pre-wet if it’s 31º F or warmer,” Berns says. “Pre-wetting can sometimes make it slushy and even more slippery. We educate our drivers so they know what to do given the conditions.”

The appeal of anti-icing

As pointed out earlier, a separate set of fan nozzles allows operators to spray brine directly onto the pavement, covering an area of roughly two truck widths. But instead of performing this service after ice has formed, anti-icing involves spraying brine on the surface before a snow event, helping to prevent a bond from forming between the ice and pavement.

Berns says that if his crews can get a good anti-icing application down before a mild snowfall of an inch or less, they might not have to go back to plow. However, if the snowfall is more significant and plowing is required, the crew’s job is a lot easier. Without a bond between the ice and pavement, plows can quickly clear lots right down to the pavement.

As in the case of pre-wetting, anti-icing is something Berns avoids if it’s warmer than 31º F. One thing he can’t avoid, though, is that snowstorm that never materializes.

“It’s taking some time to educate consumers as to the real benefits of anti-icing,” Berns says. “Some might get upset if they pay for an anti-icing service but then it never snows. We have to explain to them that, unless it rains, the product will last for several days without losing its effectiveness. It’s just a matter of education.”

For some clients, it’s a much easier process—and sell. “Clients who are open 24 hours, such as shopping centers or hospitals, really like the anti-icing service,” Berns points out. “We also have several customers who are on an all-inclusive, all-season contract. We include anti-icing services for these clients, as well.”

In the face of salt shortages and other economic challenges, progressive snow and ice management contractors have positioned themselves for success. Berns Landscaping Services has taken its progressive approach in the form of new pre-wetting and anti-icing practices, and by doing so, Jim Berns has seen multiple benefits. “We’ve reduced the amount of salt we use, and at the same time have gained the ability to have our lots wet at cold temperatures,” he says. “That’s a combination that works very well.”

Anti-icing is all wet