Supply, acquisition and pricing are all factors in salt use during the winter months 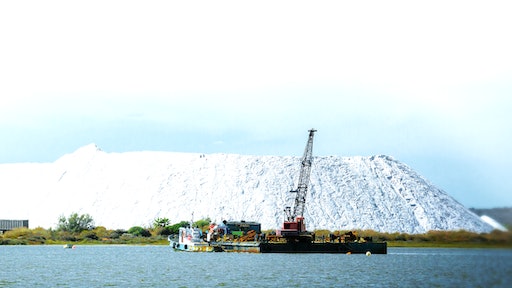 Next to labor, salt is one of the most significant components to snow and ice management.

Suppliers and contractors have been discussing the topic at recent events including Snow and Ice Management Association’s (SIMA) 22nd Annual Snow and Ice Symposium in Grand Rapids, MI in June and the 2019 Accredited Snow Contractors Association (ASCA) Snow Show in Pittsburgh in July.

At both event, panelists discussed the current climate of salt acquisition for winter services in terms of material flow, availability and prices as well as highlighting some of the challenges of a contractor and supplier relationship.

One scenario that is completely false across the industry is any likelihood that contractors will have no problem with salt this year or in the future.

“Salt is the most abundant and one of the cheapest commodities on the planet,” said Rob English, president of Chemical Solutions, Inc. He was among five panelists at the ASCA show which included Troy Clogg, owner, Troy Clogg Landscape Associates, Ellen Pouthier and Jerome Kowal, vice president of sales and operations, Apalachee Salt and Jeff Sneller, president, Sneller Snow & Grounds.

English noted that there are countless factors from government regulations to weather that can affect how salt flows when weather comes in.

“We have weather events that sweep across the whole country,” English said. When its early in the season, such events can put a dent in salt supplies and begin to set the stage for problems further into the season.

One of upcoming issues he referenced during the ASCA panel was the upcoming International Maritime Organization’s 2020 regulation relating to sulfur emission. As of Jan. 1, 2020, the limit for sulfur in fuel oil used on board ships operating outside designated emission control areas will be reduced to 0.50% m/m (mass by mass.”  This is expected to significantly reduce the amount of sulfur oxides emanating from ships and should have major health and environmental benefits for the world, particularly for populations living close to ports and coasts. To date, English said many vessels do not have scrubbers or the capacity to burn fuel that will go that low sulfur level.

“Everyone has been putting it off saying they are not going to do anything,” English said. As a result, for the snow and ice management industry, there could be vessel availability problems in terms of the flow of salt supply on the waterways.

“There are just an awful lot of variables,” he said. “It comes down to risk management and who's going to take the risk: the end user, the customer, the distributor or the supplier. Somebody has to step up and pile it up and take the risk as to whether or not it snows. That's the person who stands in line to be in the best position if the weather turns favorable and is going to take the biggest sting if it doesn't, but it's the nature of the business.”

Suppliers and contractors have to take those factors and more into consideration when determining salt amounts.

“First of all, we weigh in those factors and hopefully we get lucky and we don't have to deal with that,” Kowal said. “In the coming years, water, rail and shipping is going to become a strong factor. From the point where we have our stockpiles and delivering it from the stockpiles directly to you, it's trucking and depending on where the contractors are all that plays a factor into how long it sits there and how quickly you need it.”

“It's a, it's a up and down variable, but you're at the mercy of what the weather does, everything from the top all the way down,” Kowal said.

A similar sentiment was shared at the SIMA salt panel discussions.

“Salt and chloride are the tools of our trade. If we don’t have that tool, we are in trouble with our clients,” said Carl Bolm, president of BSR Services. “The challenge is that we are in an industry where change is happening and one would say that it’s moving faster than we are moving.”

Balm was joined at the SIMA Snow and Ice Symposium by Phill Sexton of WIT Advisers, Tony Johnson of Midwest Salt, Nate Clemmer of SynaTek Solutions, and Jim Gregor of Sullivan Corporation.

Both English and Johnson referenced the impacts of the flooding this year on the Mississippi River which closed ports and prevented some shipments.

“Imports were coming in, but there are only so many vessels that could get through, and you can’t really bring in vessels with (shallow water) and the rocks to get salt to the right places,” Johnson said.

Also, as a supplier, he acknowledged that the big companies would be looking at the government contracts first. Johnson said there would be a shortage for the public roads if the suppliers focused on the private contractors first, leaving the roads unsafe and the parking lots safe.

Winter's Over, Time To Order Salt

Pouthier told attendees at the ASCA salt challenge panel that contractors should begin having conversations with suppliers as soon as possible.

“I think it should be an open conversation,” she said. “We sort of base what people are going to buy based on what they did the year before. I know it's hard to gauge what the season's going to be like but, but sometimes there are new accounts or they lose contracts and we like to keep the conversation open.”

Sneller noted that they started talking about salt acquisition in March and April.

“Salt is exciting to me,” he said. “In the off season if we were to run out of a product it doesn't get people's adrenaline going. Not that we don’t have issues running out of product in other seasons, but snow is our lifeblood and salt is such a critical part of that.”

Sneller added that when there is a shortage, a supply issue or pricing issues as has been occurring in the Midwest, it only increases the excitement and rewards those contractors who plan ahead.

Contractors on the ASCA panel said they measure every property to determine the salt usage. Each property has its own budget for home much application and at what service level.

“I would not want to fall prey to whatever could happen between now and November,” he said. “I want to know my number, I want. And, and to the same with Jeff. Each site has a calculation. We round up about 40% as well. and then we know our costs, we communicated with our clients. We get in front of more and more clients every year to share in the cashflow burden of that."

Clogg noted that there are only two groups of people to educate customers and the crew.

“Our customers need to learn these things and learn that we need to go buy salt and talk to suppliers early and give them deposits or pay for the whole thing," he said. "Whatever it may be, that should never be hidden from a customer.”

“I think it’s a very important component of it to let the customers know, these are the things that we need from you and we need these commitments and don't give me estimates that aren't realistic,” English said.

Clogg and Sneller each indicated that they maintain relationships with multiple suppliers throughout the season and “not having all your eggs in one basket” is a significant operational tool. Both have experienced the trials of attempting a long-term relationship with a supplier who appeared to be in position to maintain a consistent supply and the came up short or raised prices for longer shipping distances.

After being hit with the additional trucking fees as the salt was shipped from greater distances, Clogg vowed never to face that lack of control again and is now importing his own salt while continuing to grow the size of his business and salt stockpile.

From a contractor perspective he stressed the importance of having contracts that have an allocation amount for salt and for the labor portion, because it's based on volume.

“There are enough weather departments and enough sanctioned areas to measure how much snow happens in your market,” Clogg said. “If there is less, give something back to the client, if there is more, they pay you more. Educate the clients and share the costs.”

Sneller notes that his company has eliminated any all-inclusive contracts so everything is written with the understanding that as the price of salt moves so does the contract price.

In June at the SIMA symposium, Gregor stressed the importance of the contractors reviewing their overall needs when making decisions on purchases and pricing.

“We’re all in this together making sure the snow and ice industry is moving forward,” he concluded.