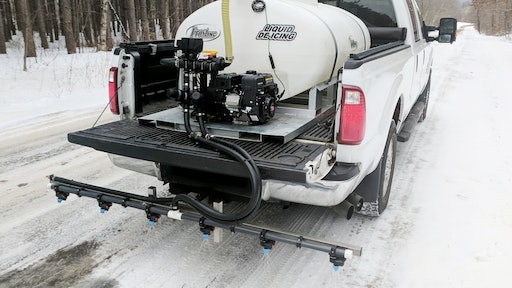 Over the last decade, snow and ice management contractors have begun introducing brine and liquid deicing and anti-icing product into their overall operations to cut costs, increase profits and improve sustainability.

A pair of industry leaders offered a frontline perspective on how to move forward with use of liquids during a session at the 2019 Accredited Snow Contractors Association (ASCA) Snow Show in Pittsburgh in July.

Jerry Schill, owner of Schill Grounds Management of Cleveland and Darren Rafferty, president of Darren Rafferty Inc. Landscape Contractors were asked to address the latest advancements in deicing and how contractors can integrate them into their strategies.

A common misconception by contractors considering using liquids is the idea that the liquids will replace use of salt completely and be a cure all for deicing.

“The reality of it is it's just there to prevent the bonding for the start and help them plow and get the site clearer and faster,” Rafferty said, noting that there will events where the liquid works to the expectations and others where sleet or rain washes out the liquid and sets them back to square one.

Before liquids got introduced, snow and ice contractors, were basically fighting from the top down. A snowstorm would come through, they plowed and cleared and put ice melt down. With liquids, the idea is to work from the bottom up.

Read Next: Six steps to successfully adding anti-icing to a snow removal operation

“What that liquid layer does is prevents that hardpack layer, allows you to get the snow and ice cleared much quicker and efficiently,” Rafferty said. "We still do one basic job, we take the white stuff off the black stuff, so in essence we're removing the snow and ice.”

The added benefit of using liquids is a reduction in the amount of solid ice melt or bulk salt materials being utilized. Schill said he approached the use of liquids from a sustainability perspective, based on the use of those bulk salt materials and the impact on the infrastructure including sidewalks, sewer systems and waterways. In addition, he noted that labor savings played a role in his decision to use liquids.

“We've realized that liquids have allowed us to go out and do some preventative care, which buys us time,” he said. “We can actually reduce the amount of manpower we need post event to from a cleanup standpoint because of the bonding or the lack of bonding on pavement.”

Having used liquids since 2005, Rafferty similarly learned through trial and error that when used properly, liquid deicer or anti-icing products can help tremendously in snow fighting efforts.

“It’s another tool in our toolbox,” Rafferty said, noting that use of liquids will save money and get the blacktop blacker and cleaner faster and increase the operations overall efficiency.

Combined, a contractor is looking at a minimum of approximately $8,100 to get into the use of liquids.

“When you factor in this amount of cost compared to what your savings may be later on, it really isn't a lot to get invested into,” Rafferty said. “What I would suggest is do your homework, study, learn from somebody so that you can implement this properly into your operation.”

For contractors looking to utilize liquids in their winter operations, Schill suggests reaching out to resident experts in the market for some help and starting small. He also recommends a review of existing assets from an application standpoint and figure out what could be utilized before making a huge investment.

“Liquids aren't a one size fits all, there are so many mad recipes and things that you can add and not add things you should or shouldn't add,” Schill noted. “It is a very trial by fire kind of exercise because it doesn't always work.”

Options for liquids to purchase are pre-made or for a contractor to create their own if their infrastructure allows for it and based on what is more cost effective.

"There's a lot of different liquids on the market, do your homework, see what works best in your market," Rafferty said.

The starting point with liquids is a sodium brine, which is salt mixed with water. What is commonly seen in the market is products being added to that mixture such as magnesium chloride, calcium chloride or any of a variety of agricultural-based products in effort to reduce the freezing point of water and allow the brine to work at lower temperatures and get more pushes at a site.

Both Schill and Rafferty seemed to agree that the best methodology for a contractor is to do some research and figure out what is best for their market and what is going to be the most cost effective.

For starters, a storage tank of some kind is required to store any liquid that is going to be used for the anti-icing and deicing operations. In conjunction with the tanks themselves is the various hoses, plumbing and gas or electric transfer pumps to connect the tanks to the equipment being used to disperse the liquid.

Size of the storage tank or tanks should be determined based on the size of the sites being serviced.

“The last thing you want to be doing is looking for liquids during a storm,” Rafferty said. “Also, depending on distance that you're traveling in between sites that may determine if you're going to need satellite tanks out in different areas to help you refill.”

He recommends plastic over metal tanks due to the corrosiveness of the brine. However, he cautions that plastic tanks can get brittle in the cold temperatures.

When it comes to the pumps, which are a mix of gas or electric, Rafferty leaves it to the contractor. “Anything that's going to get you from point a to point B, the storage tank through the pump into the spray vehicle,” he said.

For the spraying application, that is going to be trailer-mounted, truck-mounted, a separate vehicle. As with most of the other decisions, it depends on the size of the operation and the size of the sites being treated.

With the use of liquids, maintenance becomes major factor on the equipment due to the additional wear from the corrosive materials.

Rafferty noted that brine by itself is corrosive by nature and typically any additive just make it more so. If anything sees wear from the use of the liquids it’s the equipment or trucks, including brakes, rotors, drums, metal on frames and truck bodies.

He and Schill both indicated the importance of regular washing and cleaning of equipment after a storm. Also, it’s important to ensure everything is kept lubricated and to regularly check nozzles and fittings prior to an event so equipment or product failure does not occur during a storm.

Ground and air temperatures are key factors in the liquid application process. Rafferty provides infrared thermometers to his foremen to ensure both of those are within the working range of the products being utilized.

“It is crucial to have that information out to your crews because you don't want your crews putting material down at the wrong temperatures,” Rafferty said.

Not all liquid products are created equal in terms of temperatures ranges that they are effective at.

“What that infrared thermometer is going to do is very quickly give you ground temperature shot, air temperature shot, and you're going to know what range you're in very quickly,” Rafferty said. “You can always use the swag (scientific wild ass guess) method instead but sometimes that could come back to bite you so I'd definitely suggest getting an infrared laser thermometer.”

Transitioning to use of liquids as part of a snow and ice management contract can be challenging to explain to clients. Many property owners or managers are adverse to use of liquids and want the the more common sight of salt on the ground as proof that the contractor was present.

“It's all about educating the clients on the benefits of how the products work, particularly from the safety aspect,” Rafferty said.

During his company’s initial use of liquids, he struggled to practically give it away. By the second year, when the property managers were seeing the results, use of the liquids became more a premium service and now through continuous education within the New Jersey market he serves, the property managers now ask about or for liquid use at this point.

Schill said another benefit to clients is the reduction of post season damage to turf, plants, trees and other assets.

“A lot of those are other intangible things that people don't often think about that could be used as a differentiator in your market and your process for going to market with liquids,” he said. “When you can take a case study, literally put it in front of somebody and kind of share a local story or a local property where they've seen significant benefits, it becomes a much easier sell.”

Buyers Products Makes Series of Donations, Encourages Others to do the Same

Optimize your storm management and deliver level of service goals in the timeliest manner
May 10, 2019