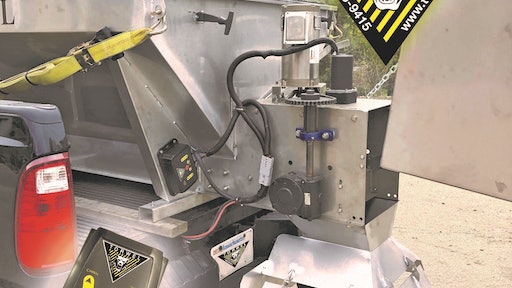 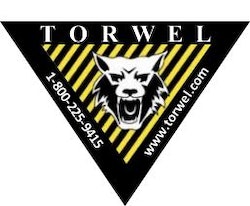 Torwel Limited has announced expansion of its line of single and dual process variable speed electric sanders to include ECO Switch, a radio wireless, hand-held remote control which will be showcased at the Snow and Ice Management Association (SIMA) Snow and Ice Symposium.

Torwel has incorporated ECO Switch into its original sander design, optimizing its wide and stable 36" base.

The remote control unit mounts on the sander gusset, supported by Torwel's highly durable substructure, which allows the sander to remain fully operational even if the controller is lost or damaged.

From within a 60-foot radius of the vehicle, operators command sanding operation exactly when and where they choose.

Approved by the FCC for airport use, ECO Switch has been fully tested in the field under extreme conditions for both agricultural and snow and ice applications.

Torwel's single process variable speed remote-controlled unit permits the operator to increase or reduce the chain and spinner speeds simultaneously while maintaining the same relationship of speed between the spinner and the chain as set by the factory.

Both the chain and the spinner speed can be adjusted separately by the dual process variable speed controller. Torwel's original single-engine electric sander with factory-set chain and spinner speeds remains available without ECO Switch.

All Torwel units are stainless steel and include heavy-duty screen, tie-downs, and wood runners. Torwel's rugged spreaders may be used with salt, sand, and other materials.