Machines for the Next 25 Years

An equipment manufacturer sets out a program to make major updates to its excavator product line in order to take advantage of new technologies for continued machine utilization. Can a similar approach be used in the green industry? 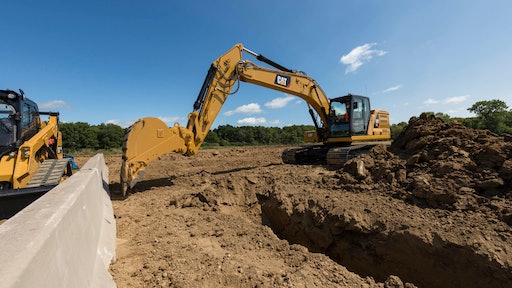 2D fencing technology on the new Cat 320 creates an imaginary border to prevent the machine from hitting obstacles near the work area.

For the first time in 25 years, Caterpillar Inc. has made a major overhaul to its hydraulic excavator line, starting with the introduction of the new 320, 323 and 320 GC excavators. These three machines are designed to meet a broad range of applications within the 20-ton size class.

While each machine is intended to meet different application needs, all three have the same core design featuring integrated technologies, electrohydraulics, a redesigned operator cab with touchscreen monitor and push-to-start button, as well as various connectivity features.

Caterpillar initiated the redesign because it recognized the evolving needs of its customers—for greater productivity and safety, among other needs. According to Zach Kauk, Vice President, Excavation at Caterpillar Inc., the hydraulic excavator is the most versatile tool in a contractor’s fleet. “Because of that, about 50 percent of global construction equipment sales are hydraulic excavators,” he said during the launch event for the new excavators. “If we want to make our customers more successful and help them build a better world, we’ve got to start with the hydraulic excavator. That’s what we decided to do with the next generation excavator program.”

Kauk said that while the company’s excavator platform has evolved over time, it saw the opportunity to make customers more successful as Caterpillar looks ahead to the next 25 years.

Digital technology use on work sites has increased over the last several years as the technologies have grown and evolved. Kauk said Caterpillar has seen the shift toward the digital work site accelerate as customers see the benefits it offers. “Today we’re at a point where customers who are the most successful are adopting many of the geospacial and other technologies of the future, and we only see that accelerating rapidly over the next couple of years. In the next 5 years many customers will have a hard time being successful without having adopted those technologies.

“So we must prepare our products for the next 25 years for these four key themes, and that’s what we’ve done,” he said.

The new 320 GC, 320 and 323 were designed to three key numbers—15 percent lower owning and operating costs, 25 percent lower fuel consumption and 45 percent improved efficiency. Kauk said these numbers were achieved through the inclusion of a “digital heart” in each machine. “For the first time, [Caterpillar is] standardizing across its entire hydraulic excavator product line an electrohydraulic control valve, electronically controlled pump and electronically controlled engine,” he explained. “They all work in harmony to lower operating costs, [and provide] higher efficiency across a broader range of applications.”

A redesigned cooling package also helps to reduce fuel consumption. It consists of five electronically controlled fans (e-fans) which can provide on-demand and independent cooling to keep the various machine systems running at optimal temperatures. The fans can all run at different speeds, as required by the machine’s cooling needs; multiple fans can run at one time, or just one or two, again depending on the requirements of the machine. The fans are run only when needed which burns less fuel. They also have a reversing capability to keep the system clean.

All three machines come with a rearview camera, and can have additional cameras added; the 320 GC comes with Caterpillar’s Product Link Pro—providing basic machine data such as fuel burn, and service notifications—while the 320 and 323 have Product Link Elite which allows two-way communication. Information can be pulled from the machine as well as put onto it, such as updates.

This ability to send machine updates is designed to be similar to updating one’s smartphone—customers will receive an alert and can make the choice to have the software update downloaded. Kauk said Caterpillar’s intention is to continuously update the machine via an annual rollout program in which new software with new features and functionalities will be offered.

The new 320 and 323 also come standard from the factory with various integrated sensors. These sensors enable the machine to know where the work tool tip is in space versus the center of the machine, or any other part of the machine at any point in time. Having this capability allows the company to standardize 2D grade control, as well as payload and productivity features. In addition, Kauk said semi-autonomous productivity features are also standardized on the machine.

With Cat Grade 2D and Cat Grade with Assist—also standard on the 320 and 323—more machine functions can be automated, said Brian Stellbringk, Market Professional at Caterpillar Inc. Cat Grade 2D allows operators to see where the excavator’s bucket is, as well as the depth and slope of the grade being dug. Cat Grade with Assist can then be used to prevent over-digging by having the boom and bucket take over the actual digging, so all the operator has to focus on is stick movement. The two systems work together to help improve operator productivity, as well as work site safety as there is no longer a need for a person to stand outside of the machine to check the grade.

Also part of the Cat Grade with Assist system is Swing Assist. This functionality uses the excavator’s integrated swing sensor to allow a swing target to be set, preventing operators from swinging too far and missing the truck or other target at which they are to dump materials. “It lends well to very repetitive apps,” said Stellbrink. “The operator sets it once, then throughout repeated cycles, the machine will automatically decelerate and stop at [the set] target even if the operator continues to use the controls.”

Due to all of the integrated sensors and software, the 320 and 323 are “3D ready”—they can be upgraded with GPS receivers and a monitor for use of 2D advanced or full 3D geospacial technologies. All of the mounting points are already on the machine, as well as the necessary sensor technologies, so all a customer needs to do is mount the additional components—which can be done within about 2-3 hours—and they will be ready to go. The machines can also come straight from the factory with all of the 3D technologies integrated.

For improved safety, 2D fencing technology is included on the 320 and 323 to enable boundaries to be set in which the excavator operates. An imaginary wall, ceiling, floor or swing limit can be set; when a limit is set, operators can continue working as they normally would, but the machine is prevented from going past the set limit. For instance, if an excavator is working alongside a roadway, a swing limit can be set to prevent the machine from turning into traffic while still allowing the operator to work. Even if too much swing command is given by the operator, as long as that e-fence is set, the machine will not go past the set limit.

In addition to the standardization of digital technologies, Caterpillar’s new 320 GC, 320 and 323 include several other updates. The inclusion of an electrohydraulic system enabled the simplification of certain machine aspects, such as reducing the amount of filters now used on the machine. Caterpillar was able to eliminate some of the previously used hydraulic filters, such as a pilot filter as the pilot system is now an integrated part of the electrohydraulic system, helping reduce maintenance costs.

Further maintenance cost reductions were made through improving the design of the air filter which now includes an integrated pre-cleaner. The pre-cleaner removes much of the incoming dust and flushes it out before it has a chance to reach the high-capacity air filter. This doubles the lifespan of the air filter, said Stellbrink, as well as extends its maintenance interval.

The maintenance interval was extended on the excavator’s return line filter, as well—from 2,000 hours to 3,000—by improving its design and capacity.

Improving operator comfort was also a key criterion for the company. A brand new cab design is included on all three machines that provides more space for operators. The machine controls have been ergonomically designed with all of them moved forward of the operator. A touchscreen display within the cab features a simple, easy-to-use interface. Navigation on the touchscreen is similar to that of a tablet or smartphone. A jog dial on the display gives operators the option to use either the screen or the dial to navigate through the various menus.

Visibility out the right-hand side of the cab has also been improved due to an improvement of the machine profile on the right side. In addition, the height of the rear of the machine has been reduced, further improving visibility. The engine hood was removed and a flat panel used to reduce the height.

Going forward Caterpillar will be implementing its next generation excavator program to additional size classes—incorporating the standard digital heart and electrohydraulic system, as well as productivity and semi-autonomous features.