Tips to Turn Your Summertime Skid Steer Into a Winter Warrior

How to prepare your skid steer for winter snow removal operations. 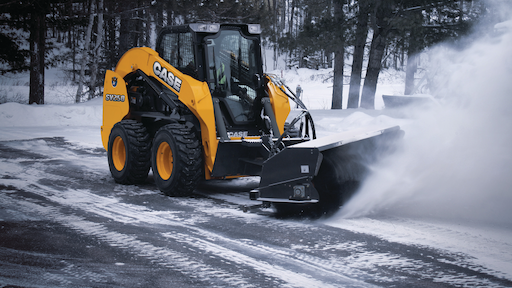 There has been a trend in recent years toward more frequent utilization of skid-steer loaders, wheel loaders and other off-road equipment to plow snow. With a skid steer specifically, its speed, agility and lifting/dumping ability make it very productive in certain applications. Furthermore, the skid steer's ability to match with attachments such as a box plow, broom or snowthrower makes it even more useful.

To really get the most out of your skid steer, there are some things you can do to prepare in advance of the snow season—and to safeguard against throughout the season.

According to Mike Fitzgerald, loader product specialist for Bobcat, if a skid steer doesn't have the proper engine oil, coolant, hydraulic oil and fuel for operating in colder weather, it will not perform up to par. For example, when the temperature turns colder, it's important to have an engine oil viscosity that matches the outside operating temperature.

"Lighter-viscosity engine/hydraulic oil is typically recommended during winter months," adds Warren Anderson, brand marketing manager for Case Construction Equipment. "It allows the oil to flow more quickly to the engine when it's cold-started. Specially formulated engine and hydraulic oils are also available for operation in the northernmost regions with extremely cold temperatures."

Aron Rodman of Extra Mile Landscaping in West Bend, WI, is a 13-year veteran of the snow removal business. He changes the oil in his skid steers both before and after the snow season. "We always use a synthetic oil, Mobil 1, for both engine and hydraulic oil," Rodman relates. "Not all of my skid steers are parked where they can be plugged in, so this oil is really good for starting and operating in cold temperatures." The Mobil 1 website says this oil will remain viscous all the way down to -35° F.

Of course, users should always consult the manufacturer's recommendations when selecting oils for winter operation. The same goes for coolants (anti-freeze). "Ensure that the coolant is at the proper level and that the mixture matches the manufacturer's specifications," Anderson says. "The coolant system should also be pressure-tested."

Lubricating grease is another thing to think about as you transition to winter snow removal. Fitzgerald says it's important to have a low-temperature grease for proper lubrication on pivot points. This helps keep moisture and dirt out, while also preventing rust, freezing and seizing. Inspect these grease points every day.

Condensation can become an issue when the temperature begins to plummet. To guard against this, Anderson says it's a good practice to top off the fuel tank at the end of each day.

Another good practice Rodman has adopted is adding a fuel treatment to all of his diesel fuel. "We have 100-gallon transfer tanks on all of our trucks," Rodman says. "We put the fuel treatment right in those tanks. It's very helpful in the cold, especially when the skid steer has been parked for a while and you aren't able to plug it in. Then you run the risk of having the fuel line and filter gel, especially when it's 10 or 20 below. That has happened and we had to bring in a torpedo heater to heat the skid steer up. Since we've begun using the fuel treatment, though, those problems have all but stopped."

Rodman uses a product called Diesel 9·1·1, which is designed to thaw frozen fuel filters, re-liquefy gelled fuel, remove water from the fuel system, and lubricate. Another popular fuel treatment available today is called K100 (see sidebar). It is available for both diesel and gasoline.

On the topic of fuel-related issues, Rodman says he's developed one more good habit. "We always keep an extra fuel filter in each truck, because you just never know when you're going to need it."

Fuel system components aren't the only things cold temperatures can wreak havoc on. Tires are susceptible too. "When temperatures drop, so does the air pressure in tires," Fitzgerald reminds. "Low tire pressure can translate into lower lift and push capabilities. Check your owner's manual for proper psi and inflate the tires accordingly."

Rodman has another secret with respect to skid steer tires. For snow removal applications, he likes to go narrower and taller. "I use a narrower, 7-inch tire because it has better ground pressure," he explains. In turn, the skid steer gets better traction. "When you get a good amount of wet, packy snow with some ice underneath, it can be hard to maintain traction. Plus, skid steers are not real good on slopes. These narrower tires have literally enabled us to continue working from time to time, especially on long, uphill driveways."

Rodman says tire height is also important. He likes a tire that's about 4 inches taller, which helps increase ground speed. The challenge here is that this type of tire, generally speaking, will only work with skid steers that do not have a wheel well, Rodman points out.

Finally, tread and rim construction are important considerations. Rodman has taken a liking to a company in Minnesota called Westside Tire, which specializes in niche and hard-to-find tires. "They sell something called the Snow Kit," Rodman tells. "The tire has a really heavy-duty rim that is nearly impossible to bend. It also has a semi-casing with retread on top that's fairly aggressive, and heavier sidewalls that can also take a lot of wear. The regular skid steer tires we use in our landscaping operation would get really worn down fast when we used them for snow removal."

Before the snow season starts, Rodman says he always inspects each of his skid steers to ensure that the headlights and strobe lights are working. On his older skid steers, Rodman also inspects the seals around the windows and ceiling of the cab. He'll re-caulk as needed using removable weatherstrip caulk.

A skid steer's battery is something you should also take a look at before the snow starts falling. Have a load test performed to ensure that the battery operates at full strength under load. "Also check the battery wires and connections for any wear or corrosion because such defects could result in the loss of amps," Fitzgerald adds.

Finally, it's not a bad idea to install a new windshield wiper blade and fill up the anti-freezing washer fluid. Also, go ahead and make sure the heat and defrosting systems work. Snow removal is hard enough—don't make it any harder by not being prepared.

K100 Fuel Treatment, available in formulas for both gasoline and diesel, can help prevent winter freeze-ups that block fuel lines and filters in your trucks and equipment, the company assures.

The Water Encapsulation Technology used in creating K100 eliminates water and all water-related problems in engines by breaking the bond between water molecules, and encapsulating them into a combustible chemical. Water-related problems caused by phase separation have been on the rise with the advent of E-10 fuel (gasoline with 10% ethanol).

Snowblowers for Skid Steers and Tractors