White clover is a tough weed to control and once it takes root it can take over lawns, especially in conditions with heavy rainfall. 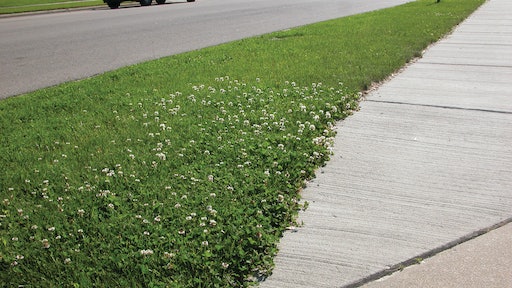 White clover is an indicator weed of low nitrogen.

White clover is a common broadleaf weed, which is easy to identify with its broad flat leaves that grow in sets of three leaflets. Each leaflet is tear-shaped and the flowers of the clover are white with “spiky” petals. Clover is a perennial weed that grows close to the ground and has a tendency to spread across lawns, rather than remaining in one spot.

Lawns that are sparse are more susceptible to white clover. White clover is competitive in low-fertility sites, for example lawns, parks and golf courses, because it hosts rhizobacteria. Rhizobacteria is a microbial bacteria that promotes growth. White Clover uses this to fix atmospheric nitrogen into plant-available nitrogen. Times of year when there are larger amounts of rainfall is not only increasing turfgrass growth, but making a gateway for white clover to invade lawns.

The most effective method of keeping white clover out of lawns is to keep the grass lush and healthy. With a thick grass coverage, eliminating empty areas or patches, the space needed for white clover to germinate and spread is unavailable. When mowing, leaving lawns higher rather than short cropped grass, makes it so that light is unable to reach the seeds. white clover thrives in nitrogen-starved lawns. To use the clover to your advantage, clip the clover before it flowers and leave the clippings on your lawn, the clover provides great fertilization without further seeding.

A common way of removing white clover is by pulling the weeds by hand. The clover typically grows in clumps, which makes pulling easy. The clover does have a large root system, and as much as possible must be pulled out to prevent the clover from re-growing. While this gets more difficult as the clover spreads, it’s best to pull it up before the patches grow very large, then you can be sure that you are removing all of the plant and root rather than missing pieces that will sprout later.

Another problem that arises out of not choosing the right product is killing the entire plant. Many herbicides do not kill off the root system in mature clover plants. The most effective types are those that contain fluroxypyr, triclopyr or quinclorac and are in liquid form rather than granular. These are components found in systemic herbicides. These herbicides absorb throughout the plant and work well on perennial weeds because they spread to different areas of the plant, rather than just the application site.

How to Plant a Clover Lawn

How To Develop a Weed-Management Program

Weeds as Indicators of Turf Problems