This synthetic turf cooling system is also being used at four other sports facilities across the nation that will host domestic soccer. 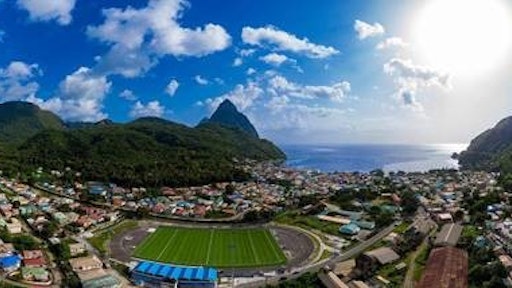 As sports facilities, parks and other recreational venues are embracing new solutions to optimize the playability of synthetic turf surfaces, T°Cool, in conjunction with the government of Saint Lucia, through the Ministry of Youth Development and Sports, has announced the first international installation of pre-treated T°Cool infill at Soufriere-Mini Stadium, one of the major host venues for international soccer matches.

This synthetic turf cooling system is also being used at four other sports facilities across the nation that will host domestic soccer, including Dennery Sports Complex, the National Sports Academy at Gros Islet, Micoud North and Micoud South.

“As T°Cool installations continue to increase at high schools, colleges and municipal complexes in the United States, our first international installation, which will serve as a host venue for international soccer matches in Saint Lucia, further validates the performance characteristics of the technology,” said Jacob Tetrault, managing director, T°Cool.

Edmund Estephane, Saint Lucia’s Minister for Youth Development and Sports, points out that “given our year-round warm weather climate, installing a proven eco-friendly solution to help combat periods of heat on the new synthetic fields was always a priority.” He further states, “as we seek to maximize usage of our athletic fields, while preparing Soufriere-Mini Stadium to host International soccer matches, T°Cool’s cutting edge pre-treated evaporative cooling technology, is a terrific solution for our world-class athletes and citizens.”

The installation of T°Cool represents a clear commitment by the Government of Saint Lucia to make the fields cooler, safer and more playable, without compromising the performance benefits. The T°Cool system is continuously activated through naturally occurring rain, dew, humidity and/or an alternative watering source during arid/dry periods. As progressive-minded decision makers seek optimal solutions to challenges associated with synthetic turf surfaces, it is recognized that a cooling solution is a must have to maximize usage of a field. In that regard, Saint Lucia welcomes T°Cool’s evaporative cooling solution for synthetic turf fields which serves to reduce the coefficient of friction, further optimizing the playing surface.

This news comes on the heels of strong domestic growth for T°Cool, led by The Citadel - the first Division I athletics program in the United States to take a proactive approach to optimizing playability by installing T°Cool on the new synthetic turf field in its football stadium.

Additionally, colleges, high schools and municipal complexes in warm weather climates, including Florida, North Carolina, South Carolina and Texas, are among others that have been early adopters of the cooling technology.