Nearly everyone is expecting significant revenue growth this year – including landscape contractors! 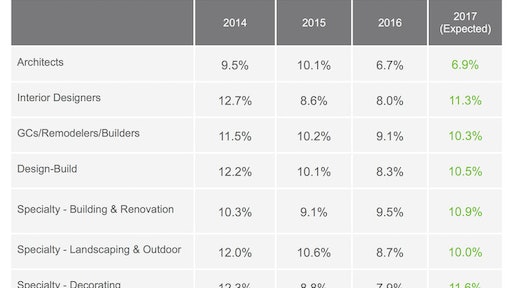 It turns out that 2016, with all its surprises, was a pretty decent year to be a home renovation professional in the U.S. Why? For many businesses, it was a good one for the bottom line. Revenues grew for more than two-thirds of companies, while profits increased for more than half, according to a new report from the Houzz research team. Many renovation companies are expecting 2017 to be an even stronger growth year — even though labor and material costs continue to cut into profits.

Read on for an outlook for this year, and a recap of last, from the 2017 Houzz State of the Industry study, which surveyed more than 4,800 residential renovation and design firms on Houzz.

Revenue expected to rise in 2017. Houzz tracks seven industry groups: architects, interior designers, general contractors/remodelers/builders, design-build firms, building and renovation specialists, landscaping and outdoor specialists, and decorating specialists. And for 2017, nearly every group anticipates a significant boost in revenue growth. Architects, by contrast, are expecting revenue to rise at a slower pace than their colleagues in the other professions.

How will this revenue pile up? Among those firms expecting revenue growth, many groups — architects, interior designers, general contractors/remodelers/builders, design-build firms and decorating specialists — anticipate bringing in larger-budget projects this year.

Related: Connect With an Architect in Your City

Profits expected to grow. The majority of firms from all industry groups also anticipate an increase in profits. Again, architects are the most cautious in their growth projections.

Firms placing want ads. One in four design-related firms expects to hire in 2017, while two in five construction-related companies anticipate hiring this year. If company expectations are met, a greater proportion of home renovation firms will be hiring in 2017 than did last year.

Revenue up for many in 2016. About one-third of companies reported that 2016 was their best business year since 2007, the year the financial crisis hit. Two-thirds of firms reported revenue increases and called 2016 an above-average year in terms of business performance. Despite the growth, the pace of the revenue growth was slower in 2016 than during the prior two years.

Business costs were up in 2016. A majority of firms in every industry group reported having higher costs of business last year. The construction sector experienced the most widespread cost increases, with increases reported by about three in four general contractors/remodelers/builders, design-build firms, and building and renovation specialty firms. Labor, products and materials were the most cited reasons for cost increases.

Not just houses. Although firms from every group tracked focus primarily on residential work, many also take on some commercial work. For an average firm, roughly one-tenth of the business is commercial work, according to the report.

Project size varies widely. As the graph above shows, gross revenue for a typical midsize project was more than $50,000 for the majority of general contractors/remodelers/builders and design-build firms. Decorating specialists, however, reported a much smaller project size: Of them, 70 percent consider a midsize project to be one costing $10,000 or less.

Mostly small businesses. A majority of architect, interior design, landscape and outdoor specialty, and decorating firms bring in annual gross revenue of less than $500,000. Half of general contractor/remodeler/builder firms bring in $500,000 up to $3 million in gross revenue.

Not surprisingly given last year’s strong business performance, the Houzz Renovation Barometer, which tracks industry optimism among design and building professionals, posted high scores for the final three months of 2016. A majority from all industry groups tracked anticipate business picking up during the first quarter of this year, after a seasonal drop-off during the last months of 2016. Optimism isn’t as high in the Midwest, where firms report less widespread increase in new business activity relative to other regions.

4 Important Steps to Any Client Meeting