Insights from the 2017 Houzz survey on landscaping trends. 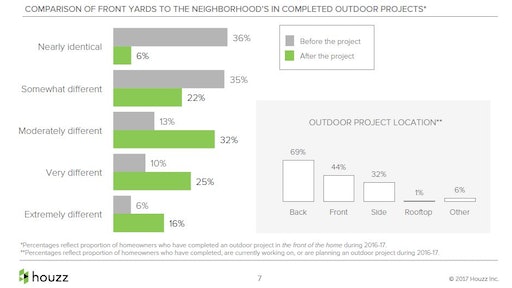 Homeowners are making significant changes to their front yards, creating landscapes that are distinctly different from neighboring properties, according to the 2017 U.S. Houzz Landscaping Trends Survey.

The survey of nearly 1,000 U.S. homeowners using Houzz who are in the midst of, are planning, or who recently completed an outdoor project, found only 6 percent of front yards are nearly identical to those in the neighborhood after outdoor projects, compared with over a third before the update (36 percent). Two in five make a statement with a new front yard that is very or extremely different from others in the neighborhood post-update (41 percent). While most outdoor projects take place in the back of the home (69 percent), nearly half involve street-facing spaces (44 percent).

New homes and existing breakdowns drive demand. Motivations for starting a landscaping project have shifted in the last year. Having purchased a home and wanting to personalize it tops the list for the first time (33 percent in 2017 versus 25 percent in 2016). While the share of projects triggered by something breaking down declined slightly, it remains high (32 percent). This is in line with many homeowners reporting that their last outdoor updates happened more than 10 years ago (42 percent).

“Home renovation activity is benefiting from the significant increase in home sales in 2015 and 2016, which is reflected in our findings on motivations for starting a landscape project,” said Nino Sitchinava, principal economist at Houzz. “Since housing inventory has remained low, recent homebuyers likely consider their homes less than ideal, leading them to prioritize upgrades like outdoor projects more than ever, with emphasis on low maintenance.”

When cultivating curb appeal, it’s all about the plants. More than half of those who updated their front yard say that beds or borders (47 percent), shrubs (29 percent) and perennials (28 percent) are most important to improving curb appeal.

Updated yards mean friendly neighbors. While the saying goes “good fences make good neighbors,” the study found that nearly one in five homeowners interact more with their neighbors post-landscaping update (18 percent). Top neighbor interactions range from small talk (71 percent) and providing help when needed (42 percent) to sharing drinks or meals with each other (32 and 28 percent, respectively).

Lighting goes smart. Lighting is the most common outdoor system upgrades in landscaping projects (45 percent). Of those making this upgrade, nearly one in five installs lighting that can be controlled from a mobile device (19 percent). Other top features are LEDs (73 percent), low voltage (46 percent), solar (41 percent) and wireless (16 percent).

Front lawn be gone. Of the three-quarters of homeowners who have a lawn, 76 percent make changes to it during an outdoor project. Front yard lawns are much more likely to be removed altogether than back or side lawns (26 percent versus nine percent, respectively), with environmental considerations being a stronger motivator for front lawns (44 percent versus 26 percent, respectively).

Despite the hype, synthetic lawns are decreasing in popularity as a replacement for natural lawns (five percent in 2017 versus eight percent in 2015).

Months of planning. The planning and execution of outdoor projects varies significantly by project scope. On average, planning takes three to six months, while implementation runs three to five and a half months. March through June are the most common months to start a project (47 percent), while November-December are least common (six percent).

Product purchases for kitchens and comfort. One in 10 outdoor renovators invest in outdoor kitchen equipment, such as a grill and either built-in cabinetry, a sink or a refrigerator (nine percent). Additionally, new outdoor lounge furniture (36 percent), fire pits (32 percent), and dining furniture (28 percent) are in high demand, adding comfort, flexibility and ambiance to the outdoor spaces.

Professional hiring remains high. Three-quarters of homeowners hired a professional for an outdoor project completed in 2016 (73 percent). However, only 63 percent plan to hire a pro for an upcoming project, pointing to homeowners realizing that they are in need of greater help than initially expected.

4 Important Steps to Any Client Meeting