Ensure That This Snow Removal Season is a Successful One

Insights and tips from landscaping division manager Luke Wilson of HuDawn Faculty Solutions on how to make the most of this snow season. 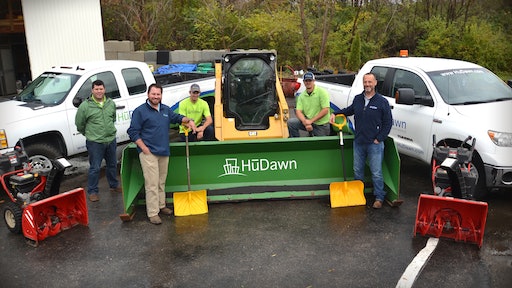 Luke Wilson and some of the HuDawn snow crew.
HuDawn Faculty Solutions

With the upcoming snow season rumored to be heavy this year, snow removal crews should be planning to make the season as quick and efficient as possible. Luke Wilson, the landscaping division manager for HuDawn Faculty Solutions in Cincinnati, OH, has advice on how contractors can execute their snow season effectively.

Wilson has been working in the industry for almost 27 years and started at HuDawn in April. He says that he’s gained experience from landscaping companies of different sizes; predominantly in commercial landscaping, but he’s also previously worked in residential landscaping as well. While HuDawn services mostly healthcare, industrial, commercial and multi-family properties, Wilson’s tips can be applied to properties of any size.

No one likes to be caught off-guard, and starting snow preparations at the ideal time can make or break a contractor’s snow season.

Well it's November now, so hopefully your snow-season preparations are already well underway.

Wilson stresses that contractors need to establish a solid plan before the season begins—keeping in mind what type of client and site for which they are best suited to provide excellent service.

“You’ll want to make sure you’re not taking on sites that will demand more or larger equipment and resources than you currently have,” Wilson says, speaking from past learning experiences.

Getting an early start is important in number of different ways:

In the case of last year, particularly on the East Coast, cities were pummeled with excess snow. While there’s never a foolproof way to determine how much snowfall there will be, Wilson has a preparation for those situations as well.

“During the off season, one of the things that I’m passionate about is making sure that I’ll have backup service partners that will work with me. Having reliable service partners to boost your resources and capabilities is key, and that’s everything from contractors to electricians, people who have trucks and equipment set up to plow snow,” explains Wilson. “I have them sign our master agreement so they’re all ready to go in the event that we need them.”

Safety during the season

When it comes to safety during the snow season, it goes beyond just teaching crews how to operate equipment properly.

“One of the things I’ve found when working outside during the winter, and one of the taboos that perhaps no one wants to openly admit, is that many companies out there—including smaller companies that are just getting started—don’t have the financial structure to support multiple shifts during snow removal,” says Wilson.

This leaves crew members working grueling shifts that can exceed 12 hours. This is something that needs to be addressed, especially in situations where you have a multiple-day snow storm and service is required around the clock. Wilson advises that companies create parameters for their crews, highlighting the importance of keeping crews safe, refreshed, fed and properly hydrated, and dressed appropriately for the weather.

“I remember one particular snow event in 2004 when I was on an ATV for about 18 hours. I think I was right next door to having frostbite on my hands and my feet,” says Wilson. “I was reaching the point where you’re no longer concentrating, and your focus diminishes as exhaustion sets in. So in helping the crews be successful, safety ties directly to that. Educating them on how to take care of themselves on the job and take breaks, and also staffing them so you can accommodate those breaks, will help ensure their commitment to their job at the most of their ability.”

One thing that Wilson has done in the past, and will bring to HuDawn’s snow season this year, is having supervising managers on the jobsite to increase crew accountability and ensure that the job is done correctly. The managers can also provide simple pick-me-ups for the crews.

“Keeping moral up is important, which can be as simple as stopping to get the crew some hot chocolate, coffee, fresh waters or some warm gloves. I find more often than not that those little things keep the crews happy and efficient, and focused on providing top service,” says Wilson.

When taking on a jobsite, it’s important to walk it first with the client, Wilson says. He highlights that the property should be seen from the client’s perspective—they know any areas that get particularly icy—and figure out what their expectations of their snow removal service will be.

Wilson explains that they even use technology when planning. “One of the fastest things we do with the snow response plan is that we use a site map created from an aerial imagery program. We’ll actually lay out in different colors how that job is going to be tackled systematically from start to finish, including the key areas and what type of equipment will be used in each area.”

A unique aspect that Wilson says can be employed under the right circumstance is tandem plowing. Using anywhere from two to four trucks or backhoes staggered in a line, crews can clear large sections of snow in less time. Like all areas of snow removal, processes can be adjusted for the size of the properties being cleared.