Wisconsin Wants to Get Plowed

What once started as a way to fund a clear winter driveway is now a thriving Midwestern snow removal business. 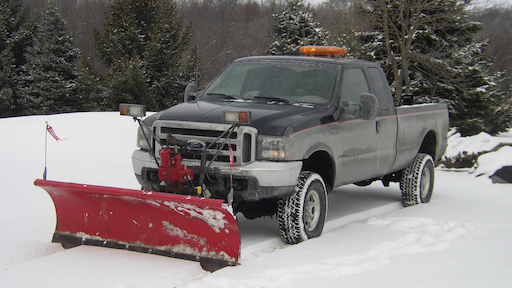 Edwin Bublitz III started his snow removal company, EB3Snowremoval, as a way to pay for a plow for his driveway one winter in Madison, Wisconsin. But 10 years later, the company is still going strong. Using his initials and being the third Edwin in his family, EB3Snowremoval seemed like a natural name for the new enterprise. He owes the simple, yet cheeky tagline, Want to get plowed?, to his wife. The double meaning works well for a state that is known for its beer brewing and love of spirits.

In 2008, a hailstorm damaged Bublitz’s house and two vehicles—one of which was his beloved half-ton Ford truck, which he ended up selling. He just bought it the year before after watching his wife shovel the driveway. He realized the now family of seven grew to depend on the truck to plow in the winter. So he decided to purchase a new three-quarter-ton 1999 Ford F-250 7.3-liter diesel. It wasn’t much later that he added the plow, which was not cheap, to help clear the driveway. To help fund the plow, Bublitz thought it would be wise to start plowing for others as well, while continuing to hold down his full-time manufacturing job.

Bublitz has since gone full time into landscaping and snow removal contracting. In fact, EB3Snowremoval now has approximately 100 snow removal accounts that are covered with five to seven employees over the long Wisconsin winters. Meanwhile, Bublitz now owns three Ford 3/4- to 1-ton trucks and just purchased a fourth. In the wintertime, he geographically compresses as many accounts as he possibly can into a tight area, so he’s not wasting time driving from job to job, but you can still find him all over Madison.

It’s All about the Equipment

The landscaping side of the business differs from snow removal because it’s more regular work—five or six days a week. Meanwhile, in winter, Bublitz is always waiting on the next big snow. “A lot of people hate snow removal. All my guys love landscaping with a passion because you’re working all day. Wintertime is my time. I’m a cold guy. When we’re plowing snow, it could be -10 degrees [Fahrenheit], and I’ll just wear a hoodie and a pair of snow pants. And I’m still sweating,” he says.

Bublitz, obviously born and raised in Wisconsin, a state that lovingly calls its football stadium the Frozen Tundra, scoffs at a heated cab. “If we’re using the Bobcat, I take the door off,” he confirms.

Because Bublitz loves the winter, it’s nothing but the best machines for EB3Snowremoval. “When it comes to snow removal, I’m buying the best. I love plows,” he proclaims. “The WIDE-OUT plow goes from 8 to 10 feet and its wings kick out on the end. You can kick out with this wing if you want and you can kick out that wing if you want, or you can just make it straight. Then you can kick them out both at the same time and it scoops.”

The WIDE-OUT plow, which is manufactured by Western Products out of Milwaukee, Wisconsin, is Bublitz’s favorite piece of winter equipment. He has three of them, in addition to a Western Striker spreader with a wet kit. Because the WIDE-OUTs are so versatile, they’re efficient to have in his snow removal fleet, not just because you can use them for many different applications, but also because that versatility speeds up the process of plowing overall. There’s less need to switch out equipment.

EB3Snowremoval prizes efficiency in its equipment, too. Bublitz’s salter has a wet kit so he can use less salt and he frequently mentions the company’s efficient salt use to his customers to help close a deal. “I always throw that I am greener on salt [than my competitors] in my sales pitches. You don’t need to overdo the salt,” he says. “But again, if the customer wants a white parking lot, I’ll give them a white parking lot, even though I’m reluctant to do it.”

Bublitz stresses the importance of a reliable piece of equipment in the harsh conditions of a Wisconsin winter: “It really depends on the equipment. You can be out there for a while [with the wrong piece of equipment]. Everything should work like a well-oiled machine” when you’re using the right equipment correctly. For snow blowing, the company employs some Ariens 21-inch commercials.

Bublitz doesn’t worry so much about his business being dependent on the weather, although he wasn’t always as confident as he is now. EB3Snowremoval remains in the black and pulls in enough money to sustain it from year to year. The company even does some discounting for certain customers. Bublitz knocks some money off if there are vehicles in a driveway he’s plowing, for example.

However, he prefers charging snow removal customers per snow event if possible. “I don’t like doing the yearly or seasonal contracts because I feel somebody is going to get screwed, and it’s usually the guy doing the servicing,” he laughs, although he admits to accepting seasonal contracts if it’s what a customer demands. “I put a lot of clauses in my contracts and base it on a 16-week snowfall, or one snowfall per week. That doesn’t happen, but statistically, it’s about 16 to 18 snowfall events. Everybody seems to be happy with that type of contract. I just don’t throw that one upfront first.”

Bublitz says he made 20 new clients this year on a day it stormed in April because he is always prepared for the late onslaught of snow and ice. In the snow removal business, you should always be expecting a blizzard. “Nobody else answered their phones,” Bublitz says.

EB3Snowremoval boasts a five-star rating online—on Google, Facebook, Thumbtack, etc. Bublitz actively asks his customers to review the company, but some also take the time out to do it on their own. He partially attributes this perfect rating to punctuality, prioritizing customer feedback and service and, when it comes down to it, fixing something if it’s wrong. Bublitz says, “My employees know that, if I’m there, I’ll take care of it. I’m proud of my five-star rating. It took a long time to get.” While he may embrace new technology to market EB3Snowremoval, he’s still old-fashioned in that the customer is always right.

But as great as it sounds to have a perfect online rating, it should also be known that one bad review can have a chilling effect on business. One of EB3Snowremoval’s customers gave a bad rating, but after being confronted, said her online accounts were hacked. “People look at reviews,” Bublitz says. That one review reduced his rating to a 4.8 for a short time.

Ever since EB3Snowremoval started working with 1&1 Internet for its website and online advertising needs, Bublitz noticed an uptick in business. He says the leads pour in through the website’s contact page. “It’s kind of like GoDaddy, but way better. I’m on there with keyword searches with all of the search engines—Google, Bing, whatever. It’s a one-time-a-year price under $300. I would refer them to anybody,” he elaborates.

It takes more than a good rating on Google and a nice inventory of equipment to sustain 10 winters of snow plowing in Wisconsin, but for a native who loves the winter—and his snow plows—it’s an easy feat. Just think: All of this to pay for his first plow. The next step for EB3Snowremoval is to secure a storefront for the business. Bublitz thinks that dream can become a reality soon; within two years, he predicts his neon sign will finally go up.

For more information on the landscaping side of the business, please visit www.greenindustrypros.com/21023635.

Consumer behavior in the age of COVID-19
Michael Paladino
May 22, 2020