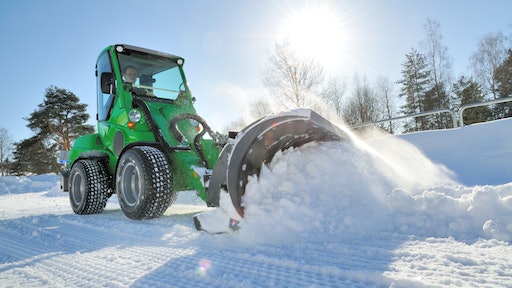 Larger equipment is always an option to consider for contractors involved in industrial or commercial snow removal.

In a presentation during SIMA’s Summer Pop-Up event, LMN CEO Mark Bradley shared how contractors can invest in the right snow equipment while still maintaining a reasonable profit margin.

There are three primary ways for contractors to buy or obtain equipment.

First, they can own equipment which is nice if it's owned outright, and a lot of contractors like to invest in equipment, pay things off and not have any debt. Secondly, Bradley says there's leasing equipment which allows a little easier access to equipment in terms of borrowing and obtaining equipment. “There are payments and quite often there's a fixed term associated with the lease that can easily be crafted to match up with contract duration,” he says.

The option often overlooked and to some not utilized enough is winter rentals. “With winter rentals often, the price is very similar to leasing, and you're only responsible to pay for the equipment during the season, that you're renting,” Bradley says. “It kind of eliminates the need for maintenance and allows you to enter into contracts that may not be as long term, as you might like.”

There are benefits to all three methods. Bradley says for most successful contractors they'll probably use a blend of all three. “I don't think that there's necessarily one way of doing things,” he says. “I think that's what I've learned from doing workshops and really working with a lot of snow contractors over the years is that often they think that they have to use one method of obtaining their snow equipment, rather than maybe using a mix.” He added that it is important for contractors to see the value of considering using the full kind of toolbox of access to equipment, whether it be ownership, leasing, or rentals.

According to Bradley, step one in really becoming aware of what makes sense when it comes to planning, and obtaining  equipment is creating an equipment budget.

“Really what happens when you create a budget for your company is, you enter your labor and material and equipment and subcontractors and overhead items,” he says, noting that the job can be accomplished in a few hours using the LMN software. “Really what we want to do here is, focus on all of the equipment expenses whether their lease payments, whether it's ownership, with or without payments.”

There are three primary ways for contractors to buy or obtain equipment.

First, they can own equipment which is nice if it's owned outright, and a lot of contractors like to invest in equipment, pay things off and not have any debt. Secondly, Bradley says there's leasing equipment which allows a little easier access to equipment in terms of borrowing and obtaining equipment. “There are payments and quite often there's a fixed term associated with the lease that can easily be crafted to match up with contract duration,” he s

Once a budget is in place, it allows a contractor to start pricing snow contracts a little bit more accurately and creatively to drive the sales process.

“We can become a little bit more competitive where we need to, and really price snow with profit in mind, as opposed to just top line revenue,” Bradley says.

Many contractors involved in snow removal start it out of necessity. Bradley himself started his landscape company with a pickup truck and a wheelbarrow. “What I really found was, as things evolved and I started adding more pickup trucks and adding more equipment, I started trying to find snow contracts that sort of matched up with my equipment,” he says. In the process Bradley says he made some big mistakes in terms of what he should have been focused on to drive profitability.

“At the end of the day that's great profit, and who wouldn't want to be in a business where you can net 50%, and in the snow business that is a very viable profitability,” Bradley said. “We see this a lot and I think that's why contractors get excited about doing snow because there are a lot of opportunities that look just like this.”

Over the years, he says the mistake he made was as more and more contracts came in with more properties, he would just add a truck and make more and more profit. “The problem inevitably, becomes at some point you don't need more pickup trucks in the summer, and if you're snow busines is scaling, you have to start to look outside of the way you've always done things,” he says. “ That's where budgeting and estimating with a little bit deeper knowledge and a little bit more financial know how really becomes important.”

Using his original concept of an industrial property, Bradley said switching the pickup truck for a loader maintains the overall cost and profit.

“This is where a lot of contractors stop and they say well, geez it doesn't make sense to invest in that big equipment,” he says. “They might say, well, I'm a little opposed to buying large equipment because I'm just not sure if I'm going to have any use for it in the summer, and that's I think what scares a lot of contractors off of investing in larger equipment.”

Bradley says he made the same mistake for many years. Where it becomes profitable to run a scenario like this with a loader, is when you really kind of skip past doing one property, and really start to focus on a route. “Everything looks great with the loader because there's there are very similar numbers to the pickup truck, but where it really gets to be exciting is, what if we go into that neighborhood and now rather than that one pickup truck spending the better part of a shift plowing that one property we find four properties in that neighborhood,” he says, adding that a loader has a lot more capacity to plow snow than a pickup truck, so with the same operator  four properties can be plowed on the same street with perhaps an additional sidewalk laborer or crew.

“This is where you become super profitable in the snow business,” Bradley says. “It's all about route densification and using larger equipment.”

He notes that having the right equipment for a job leads to happier customers.

In addition, with good equipment that is safer and easier on the body, employees are happy as well. Also, more referrals come in from neighboring properties because they can see the quality, speed and efficiency of the work associated with having the right tool for the job.

“Ultimately as a business owner, there's a lot more profit,” Bradley says, adding that there’s less unbilled time so it’s easier to get more work. He admits that contractors can drop their price a little bit when they‘ve got that route densification with the bigger equipment, because the guy with a pickup truck just can't compete.

The focus again becomes how to acquire the equipment.

Often, the holdup back reason for most contractors to not scale up the size of the equipment is they don't need it in the summer. “I think that's where it becomes very compelling to look at seasonal rentals, or even seasonal subcontractors who could perform that work with the larger equipment or renting from a dealership that has loaders for rent in the winter,” Bradley says, noting that with the rental options you’re only paying for what you’re using and it makes for a very competitive bid.

Bradley said subcontractors are another option, although he described it as essentially as renting equipment with someone in the seat.

“My thought is, it's easier to rent equipment and put somebody in the seat because in most cases, then you're managing that person, where sometimes with subcontractors it's difficult to get the same level of quality, same level of training same level of management that you can with your own staff,” he says. “Some subcontractors work fine if you have the right systems in place.”

He has always felt that it is not worth being concerned with the long-term equity in the equipment.

“If I make a 50% profit off renting equipment or subcontracting equipment during the winter months. I'm just not concerned about creating long term wealth, out of equipment,” Bradley says. “I more concerned about creating that immediate profit, and it's much easier to scale up and down when you've got the ability to really do that without putting out a lot of cash or entering into a long term lease arrangement that might be burdensome in the offseason.”