Hornets and Woodchucks and Snakes ... Oh My!

Are you prepared for encounters with jobsite varmints? 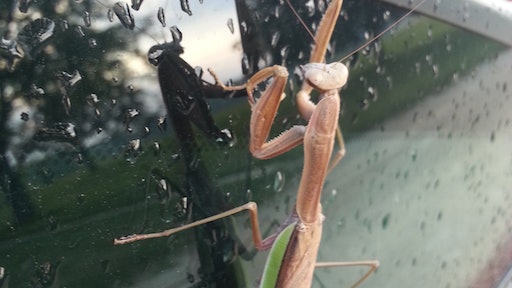 The Chinese Mantis, an imported predator, is a "worthless insect" that preys upon beneficials like honeybees, leaving other worthless insects like chinch bugs alone, Dr. David Shetlar points out.

For whatever reason, residents in the southernmost tier of counties here in Wisconsin seem to be dealing with a significantly larger volume of wasps than usual this late-summer. I had some yellow jackets attempting to infiltrate my garage via the soffit, and my in-laws had a colony of hornets breach the siding on the front of their house. Needless to say, a handful of cans of insecticide and four-letter words later, the wasps are pretty well done for at those two venues.

Then I was doing some yard work over at my parents' house about 45 miles away. I turned the corner to mow off a narrow strip of grass along one side of the house when I'd noticed yellow jackets buzzing around an opening in their siding. Man, the rotten devils are everywhere! Since these vespula were pretty high up and, thus, less likely to be aggravated by a dog or children, we're just letting them be until they eventually die in a few months. But I'm keeping an eye on them, with a can of Raid in my right hand and a life alert remote in the left.

That startling find while mowing got me to thinking, though: Do you have any good stories of encounters with unwanted jobsite varmints? We're talking bees, wasps, ticked-off birds, woodchucks, snakes, the neighbor's dog, etc.? I thought it would be fun to share a few.

Then, do you and your crews prepare for encounters like this? I joke about this because it's somewhat of a lighthearted subject compared to some of the dry business topics we often cover. But it's also a very serious one. Bee and/or wasp stings, snake bites, etc. can become very, very serious, as a matter of fact.

We'd like to hear how you keep yourself and your crews as alert—and safe—as possible on a jobsite. And if an unfortunate turn of events does transpire, how do you respond?