Fighting Fires With a Snowthrower 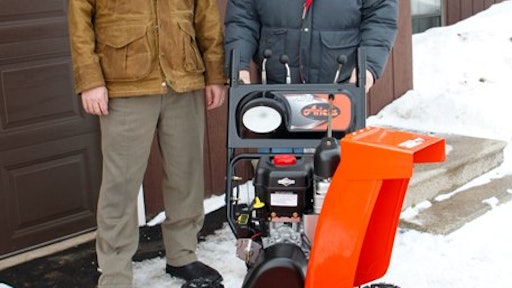 Dan Ariens, president and CEO of Ariens Company, personally delivered a new Pro 32 Sno-Thro to Steve Liubakka of Diorite, MI, in recognition of his quick response to help out a neighbor. Liubakka was featured in the news last week for using an Ariens Sno-Thro to control a fire at his neighbor’s house until the fire department arrived.

The story generated a flood of emails and calls to the company last week from around the country.

“The story really seemed to resonate with customers. They were impressed with Mr. Liubakka’s quick response and wanted to be sure we were aware of it,” says Dan Ariens. “We also heard from suppliers, dealers and employees who were proud to see a Sno-Thro used this way.”

In talking with Liubakka, the company learned that he used his son-in-law’s Sno-Thro to extinguish the fire and that he owns a 36-year-old machine. “We felt he deserved some sort of recognition for his resourcefulness,” says Ariens. “Replacing his old snowthrower with a new Ariens Sno-Thro just seemed fitting.”