The stand-on zero-turn mower will likely never rival the sit-down zero-turn in terms of shear sales volume, but their improved designs have more contractors adding them to their trailers. 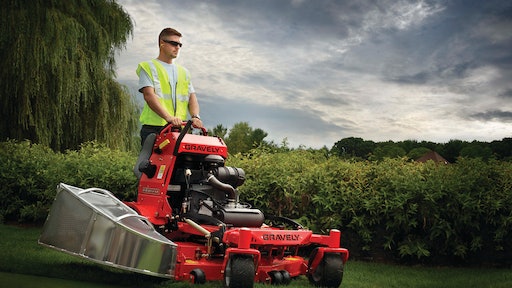 Bill Wright, founder and president of Wright Manufacturing, is a good person to ask about the evolution of the stand-on zero-turn riding mower. His company first started building stand-ons in the late ’90s. Wright says that the market for stand-ons started on a path to reaching critical mass around 2007-9 when several other mower manufacturers began introducing stand-on units. Five years later, Wright says the market could be ready to reach a tipping point.

Another Bill, Bill Engler with Gravely, is also a good person to ask about the progress stand-ons have made. Gravely is one of the more recent entrants into the stand-on category. “There has been an increasing amount of interest over the past five years,” Engler says. As more manufacturers have introduced stand-on mowers, awareness among landscape contractors has grown. “As contractors learn the benefits of a stand-on, many are realizing it is a viable option—especially those in urban areas,” Engler adds.

Toro and Exmark are two more stand-on manufacturers. While they, along with Gravely, are reluctant to share proprietary sales data, they will say that stand-on mower sales continue to increase year after year. However, stand-on sales aren’t growing any faster than the sit-down zero-turn rider. So the stand-on, although gaining in popularity, continues to play second fiddle to the sit-down.

In some instances, however, the stand-on is the preferred option for a mowing contractor. “I can fit three 60-inch mowers on a trailer (due to the stand-on’s compact size),” says Jason Fawcett of Elizabeth River Landscape Management based in Suffolk, VA. “But they still provide that nice cut swath, so they’re very productive. This is my best option when sending a five-man crew to a larger commercial property.”

Fawcett also likes the fact that you get a much better view of the area you’re mowing with a stand-on. “When sitting in a seat, you’re too low to really get a look at that stump hiding in the grass, for instance,” Fawcett relates.

In the stand-on’s earlier years, industry insiders projected that stand-on growth would happen at the expense of intermediate walk mowers. That has definitely happened to some degree. But stand-ons have also taken some sales away from the sit-down category.

To Georgia dealer Aubie Campbell of Campbell’s Lawn Equipment, there is one primary reason why some of his landscape customers are switching from sit-downs to stand-ons: Stand-ons are just as fast, and a lot more compact. Campbell is also seeing strong acceptance of the stand-on concept among his younger customers. To them, standing up is something different and “cool.” And because these younger contractors are still relatively new to the business, they aren’t as stuck on the idea of sit-down mowing.

Nonetheless, Campbell says just 10% of his commercial mower sales are stand-ons. But that percentage has grown in recent years, and has happened naturally as a result of increased interest among contractors. Campbell’s Lawn Equipment sells and services Gravely, Exmark and Toro stand-on mowers from its two stores in Forest Park and McDonough, GA.

Connecticut dealer Rich Crane Jr. of Crane’s Outdoor Power Equipment in Canaan has had a different experience with the stand-on mower. Crane’s sells the Scag brand, which has come to include the V-Ride stand-on mower. Because of the market Crane’s serves, property sizes and scopes do not lend themselves well to the stand-on concept.

“Most of our landscape customers are running 61-inch (sit-down) riding mowers, and then have a 52-inch hydro walk mower to mow tighter areas and hillsides,” Crane Jr. explains. “Many of our customers want to replace that walk mower with a stand-on in hopes of utilizing the stand-on more often on larger areas of the lawn. This is great in theory, but the stand-on definitely can’t replace the hydro walker on steep side hills or when needing to get under low trees.

“The customers we have sold stand-ons to have smaller lawns where they can’t justify a larger rider,” Crane Jr. continues. “The stand-on is more agile in tighter areas; they don’t tear as much when turning tightly. The power is incredible and the mowing quality is excellent. Right now stand-ons are about 5% of my total commercial mower sales.”

See our sidebar for more reasons why you might want to consider mowing with a stand-on.

As more contractors have taken an interest in stand-on mowing, manufacturers have taken contractor feedback to improve the mowers themselves. Today’s stand-on models feature ground speeds, durability features, floating deck designs and engines that are similar to what you’ll find on a sit-down zero-turn. That said, when comparing one stand-on mower to another, a lot of your attention will be directed toward those features that are designed to improve operator comfort.

Bill Wright says his company’s patented operator platform places the operator directly between the drive tires. Thus, the platform is only four inches off of the ground, as opposed to eight-plus inches like you might find with a platform sticking out the back of the mower. This proves advantageous when mowing over uneven terrain or in and out of valleys, Wright explains.

Exmark, Toro and Gravely each have protruding operator platforms. The platforms are retractable, however, so the mowers retain the important feature of being compact and easy to fit on a trailer. The mowers can also be converted to walk-style when necessary.

Features like self-compensating platform suspension and thigh pads further enhance operator comfort. Operator controls are also important. For example, Gravely has increased the size (diameter) of its handles. Exmark, on its Vantage X-Series models, now offers its Enhanced Control System (ECS). Toro has a patent-pending variable-speed control. Be sure to check out our Product Guide listings for a closer look at today’s popular stand-on mowers.

For a landscape contractor, whether you’re talking about a stand-on mower or a sit-down or a walk-behind, it’s all about making more money. “We’re a big company (90 employees and three locations),” Fawcett says. “From a management standpoint, we’re looking at cost. How much will it cost me to operate a given mower? I need my crews to feel good about it, I need the manufacturer to give me great service, and I want to have a great relationship with my dealer. Price is important, but service is huge.”

Benefits of Using a Stand-on Mower