With heavy rainfall, poor irrigation and shoddy lawn maintenance, Fairy Ring is a turfgrass disease that will run circles around homeowners. 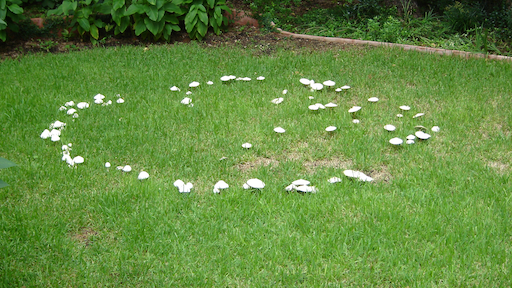 Due to recent heavy rainfalls in areas across the country, turfgrass is being affected by Fairy Rings. They flourish throughout the spring and into the heat of the summer, when moisture conditions are ideal. Fairy Ring is caused by fungus. It first appears to be simply circular areas of grass that are darker in color and fast growing. As the disease progresses, mushrooms or puffballs appear. While Fairy Ring often causes no actual damage to turfgrass, it can occasionally kill off the grass in the ring, which makes new growth difficult to re-establish. If left untreated Fairy Rings increase in size each year.

There are three different types of Fairy Ring, with Type I being the more serious.

Fairy Ring is caused when the fungus Marasmius Oreades is present in turfgrass. The fungus forms in “threads”, which root into the soil and can even go as deep as 15 inches. The fungus prevents the grass from getting as much nutrients. When the grass is dying it is because the fungus is effectively soaking up all the water as well.

According to Lee Butler, turfgrass pathologist at North Carolina State University, “Fairy Rings can spread, especially when mushrooms are allowed to form, mature, and spread their spores. This usually doesn’t happen in maintained turf areas due to frequent mowing. However spores can blow in from any number of places and establish a new ring.”

Applying a nitrogen fertilizer can effectively mask symptoms of Fairy Ring and also increase greenness in the grass. After applying nitrogen it’s best to aerate the grass in the ring and reduce thatch. Fungicides can be used to suppress Fairy Ring, but this is typically a temporary solution. Without removing the actual decaying fungus beneath the grass, the mushrooms or puffballs will return when the fungicide use is stopped. When the fungicide is applied is another important factor. If the fungi are currently inactive at that time, the fungus will be unable to absorb it.

The most effective way to combat returning or severe cases of Fairy Ring is to remove the effected turfgrass altogether. The disease is fueled by the buried fungus and other organic matter that may be present in the lawn. The turfgrass should be removed 1 to 2 feet around the affected strip of turf.

For examples of fungicide products that may treat Fairy Ring, visit our product page.

How To Control Yellow Foxtail

Not all aerators do the same work. Learn about aerator styles, productivity and application tips from Billy Goat.
Billy Goat Industries
June 9, 2020