Sprayers and Spreaders Continue to Evolve 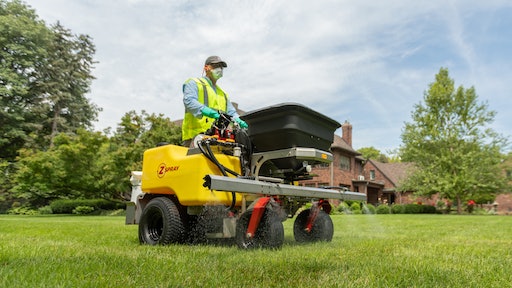 Affordable and easy to maneuver, stand-on sprayer/spreaders will continue to dominate the market in 2020. Shown here is the Z-Spray Max from Z-Turf Equipment.

Sprayer/spreaders are increasingly becoming recognized as the most efficient way to distribute liquid or granular material across a property.

It’s common to have a sprayer/spreader combination which are available in a variety of sizes similar to lawn mowers.

Lawn care contractors in 2020 saw technology improvements, from hardware to software, when it comes to the sprayer/spreader market.

Experts from Toro, Exmark, Ferris and Graham Sprayer Equipment recently spoke with Green Industry Pros on the trends they saw in the sprayer/spreader market for 2020. Many are expecting new products with improved functionality to boost the quality of lawn care, while increasing efficiency for contractors and their crews as the turf renovation space continues to grow.

Standing Up To Spray

Affordable and easy to maneuver, stand-on sprayer/spreaders continued to dominate the market in 2021.

“They take up less trailer space and then I'd say they handle a broader range of terrains better than a sit down does, in a lot of scenarios,” said Chris Vogtman, senior marketing manager at Toro. “People really appreciate that, and they get used to just being able to maneuver and jump on and off as needed, quicker, and people feel like it drives a little bit more productivity for them. We're seeing that as definitely a trend and a continued trend within our business.”

“We are seeing a lot of people trending away from the old style, where they're airing the hose off of a truck and then push spreading,” he said. “They’re moving to stand-on spreader/sprayers because they're obviously able to get multiple things done at once, as well as improve their application consistency.”

Using a hose spray off a truck limits how fast workers walk, and doesn’t control for consistency, he says.

“When you’re out using a hose spray off the back of the truck, your productivity is based off of how fast you're walking, right? You're typically going to calibrate that somewhere between let's say two, three miles an hour,” Guarneri said. “We all know that throughout the course of a day, whether it's the first thing in the morning or the last thing in the afternoon, your speed changes. Typically, it’s because you're tired or you haven't had a cup of coffee yet.”

“It's a lot easier to maintain consistent application rates, which results in fewer callbacks and makes sure you're not putting down too much of a product but also not too little of a product,” he said.

Toro and Exmark have found success with their lean-to-steer models.

“We have both implemented e-control technology on there, which helps from two aspects. One, control the amount of applicator you're putting down and then, two, control the spreader a little bit more precisely,” said Vogtman.

Sprayer/spreaders in general have become more popular as education has increased, he added.

“The bigger trend there is more dealers getting invested from a channel perspective in the business, allowing customers more places from a service standpoint. And more dealers and technicians being knowledgeable about how to service the product is really a key trend that we're seeing to help the customers be more productive and have better uptime,” Vogtman said. “I think one of the biggest trends not to go unnoticed, is just more dealers getting invested in the business and that's ultimately going to make it a better experience for the customer.”

Still Riding It Out

“The main change we're seeing right now is everybody's going to the ride-on sprayer spreader,” said Donny Pitts, general manager with Graham. “I thought they were going to be a phase. I’ve been doing this for 40 years and I’ve seen a lot of things come and go. But these keep coming up.”

“They're doing more low-volume, high-concentrate with the sprayer/spreaders and we're trying to accommodate for that by giving them a way to carry that sprayer/spreader and carry the chemical and fertilizer, too,” he said.

“There's a really fine balance between carrying more and also what's really practical,” Exmark’s Guarneri said. “Obviously, the more weight you have, the more capacity you have and the larger your footprint is on the turf.”

He noted that it would be possible to develop a spreader/sprayer that has a 500-gallon tank but it wouldn’t necessarily be good for the customer.

“We know that those operators don't want to be carrying that much weight,” Guarneri said. “It's a matter of finding that happy balance of what's acceptable by the customer, what's needed by the customer and what the machine carries.”

Toro owns Exmark, which in turn operates Z Turf Equipment. Vogtman and Guarneri talked about how the Z-Spray Master Max, with its 60-gallon tank and 220-pound hopper, is one of the company’s most popular sprayer/spreader models.

“We want to be very cognizant of weight and managing a good experience for the customer,” Toro’s Vogtman says. “We feel like we've kind of got to the limit of where we would like to be right now. The [Spray Master] Max holds what I'd say is the right amount to allow the contractor to get a big job done, but is also equally balanced with not burdening them with getting it on and off the trailer. We're trying to balance those unique needs. There are some situations where I tell you going bigger could be better, particularly if you don't have to transport the unit. But with the Max, we feel pretty good about the capacity that we have there on our Spray Masters today.”

Meanwhile, the new Ferris Voyager FS5250 comes with an 80-gallon liquid tank and 250-pound granular, Rich Clark, Ferris’ national sales manager says, suggesting that there is nothing else on the market quite like it.

“The standard has been 60 gallons or less,” he says. “Part of it is because of weight distribution and weight impact on the soil. If you have two machines with the same size tires on the same exact machine but different tanks, they're going to have different impacts on the ground. What Ferris has solved with that is, we have increased the capacity from 60 to 80 gallons and then 250 pounds of fertilizer plus an extra 100 pounds of bags that you can carry out.”

The Voyager sprays in 12-foot-wide swaths instead of the standard 10, uses a vibrating agitator to break down fertilizer instead of grinding it and is equipped with a three-section breakaway boom.

Ferris estimates that the Voyager’s capacity and design helps increase productivity by about 20%.

“You boil that down to what a landscaper might do in a day and that's shaving an hour or two off the day. A nice way to look at it is what you used to do in five days, you can now do in four days,” Clark said. “That's a real change in productivity.”

The other key features of the Voyager that assist in making landscapers more productive is the low center of gravity and the traction, including the articulating front-end that helps provide some of the stability.

Clark noted that the Voyager falls into the “extra-large” category of spreader/sprayers. The machines are designed for big commercial properties, schools, industrial parks or even big yards. However, the booms fold in making it possible to transition to smaller compact areas as well.

“It's a pretty versatile machine,” Clark adds, acknowledging that it might not be the right product for smaller properties.

“Now there are a lot of people out there that may or may not be spraying or treating properties that are big, big areas,” he said. Those contractors might be better served by moving down to a medium or large size machine such as the Ferris Pathfinder, Rover or Venture machines.

Each of the manufacturers indicated they would continue to listen to dealers and contractors to meet their needs with additional equipment and technological upgrades to sprayer/spreaders and related tools. This is great news for contractors, as it should make it easy to find the machine you need for the job.

How To Select the Right Sprayer or Spreader