Benefits of Using a Stand-on Mower

Thanks to better price points, a refined market position and wider distribution, manufacturers are optimistic that the stand-on mower will continue gaining in popularity. 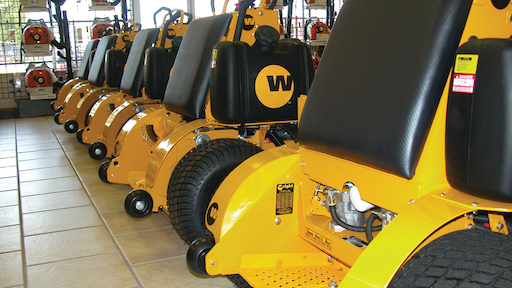 Wright Manufacturing's patent allows it to place the operator platform directly inside of the drive tires.

When stand-on zero-turn mowers were introduced to the marketplace more than a decade ago, manufacturers hoped the product would soon become as popular as both the sit-down zero-turn and intermediate walk-behind. It never happened. But today, thanks to improved designs, better price points, a refined market position and wider distribution, manufacturers are optimistic that the stand-on won’t be standing still much longer.

The stand-on mower is designed specifically for landscapers, especially those in metro areas who have smaller, highly landscaped properties to maintain. The nice thing about the stand-on is its ability to maneuver into very tight spots, but still give the operator a chance to ride. Stand-ons also handle hillside terrain effectively, while the out-front deck provides great visibility in and around landscape obstacles.

As you can see, whether or not a stand-on would make a good addition to your fleet largely depends on the types of properties you maintain. You also want to think about your crews and how you want to equip them.

For example, many larger landscape contractors operate several “specialized” crews. The stand-on may be a good option for a crew that’s maintaining primarily smaller properties, and/or properties with a fair amount of landscaping and/or slopes.

Read next: How to Safely Use Stand-on Mowers on Slopes

On the other hand, many smaller landscape companies who have a couple do-it-all crews may also find the stand-on to be a good option.
A mower’s flexibility is a big deal to a smaller company that’s maintaining several types of properties with the same crew.

While the stand-on is ideally suited to smaller properties and slopes, it does possess the gusto to mow fast in open areas. Still, if the majority of your properties require wide-open mowing, a mid-mount sit-down zero-turn with a big deck is probably a better choice.

Landscape contractors have typically compared the stand-on to an intermediate walk-behind. But some of today’s more evolved stand-on units, with floating decks and more powerful engines, stack up well against the compact mid-mount zero-turn rider.

Bill Wright, president of Wright Mfg., says an increasing number of Wright stand-on purchasers were previously devout ride-on users. “When we first started building stand-on mowers more than 10 years ago, I’d say 90% of our sales went to landscapers who’d been using walk-behinds. Now we’re pulling from both directions about 50/50.”

One reason that’s happening, Wright says, is because an intermediate walk mower is completely off the table for some landscapers. As certain models of mid-mount zero-turn riders have gotten smaller, some with cut widths as narrow as 34 inches, intermediate walk-behinds have lost their place in the eyes of some commercial operators.

Furthermore, many landscape contractors, especially those who are fairly new to the business, don’t even want to think about walking. They want to ride, but they want to ride cost-effectively with a unit that can swiftly maneuver on and off properties.

Expanded product lines with features, options and price points that appeal to both walk-behind users and sit-down users are helping stand-on manufacturers appeal to a wider variety of customers.

For instance, a fixed-deck unit, compared to a floating-deck model, comes in at a lower price point that’s more likely to entice a traditional walk-behind user. Conversely, a floating-deck unit, perhaps with a wider cut width and higher-horsepower engine, may grab the attention of the ride-on user who’s used to spending more anyway.

Battery-powered tools that rival gas equivalents with no emissions and reduced noise pollution
Greenworks Commercial
May 19, 2020